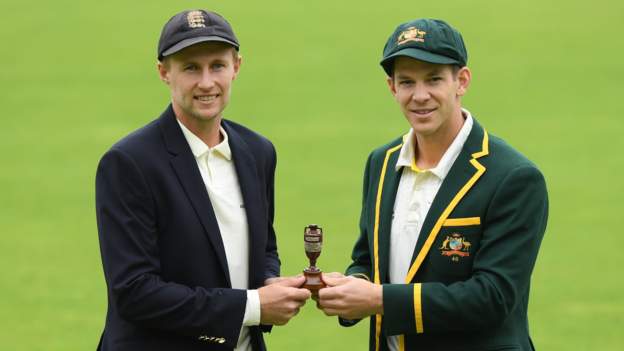 England and Wales Cricket Board chief executive Tom Harrison says he is “confident” this winter’s Ashes tour of Australia will go ahead.

England players are seeking assurances that they will be able to be joined by their families in Australia.

“People come first. That is our view and we will continue to take that approach,” said Harrison.

“These are very reasonable requests we are asking the Australian government to give some leniency towards.”

Australia has some of the strictest Covid-19 protocols in the world.

England players who take part in the T20 World Cup and the Ashes face the prospect of being away from home for four months.

The World Cup takes place in the United Arab Emirates and Oman from 17 October to 14 November, with five Ashes Tests scheduled from 8 December until 18 January.

In July England players held meetings with the ECB and Professional Cricketers’ Association, with some considering pulling out of the Ashes if their families are not allowed to join them for at least part of the tour.

“It’s going to be important for us that we can give the comfort to players, that their families will be in Australia, that the conditions of quarantine are reasonable, and enable the players to be at their best for that series,” said Harrison.

Harrison said he has regular conversations with Cricket Australia, although there is no timescale for when the situation might be resolved.

He added: “We need the assurances that our players can get on a plane to Australia and feel confident they can be at their best.

“I’m very confident we’ll get to a place where we can fulfil our obligation to tour.”

Harrison drew a comparison between the Ashes tour and England’s current series against India, before which the ECB approached Prime Minister Boris Johnson for permission for the tourists to be joined by their families.

If some England players withdraw from the Australia tour, questions over the credibility of the Ashes series would arise.

It is already unlikely that travelling supporters will be in attendance, while there will be challenges for overseas media.

“The integrity of the Ashes is paramount. Cricket Australia understand that just as well as we do,” said Harrison.

“Cricket Australia are taking it very seriously and understand the issue at hand.”