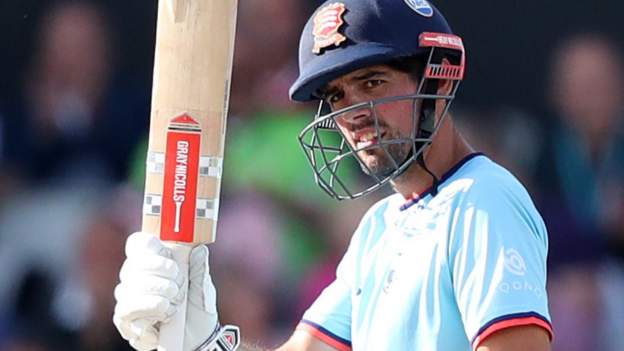 Durham and Glamorgan earned home One-Day Cup semi-finals, while Gloucestershire, Surrey and Yorkshire joined Essex in qualifying for the quarter-finals following the last round of group fixtures.

Victory for Lancashire at home to Essex would have seen them through at Gloucestershire’s expense in Group A but Essex scored 21 off their final over – including three consecutive sixes from Simon Harmer – to tie the match and send the Red Rose county out.

Gloucestershire finished with one point fewer than Lancashire but go through on points per game after their match at Middlesex on Sunday was called off due to a Covid-19 outbreak in their squad.

Essex will host Yorkshire on Saturday for the right to go to Glamorgan in Monday’s last-four tie, with Durham to face a home semi-final on Tuesday against the winners of Sunday’s quarter-final at The Oval between Surrey and Gloucestershire.

The final takes place at Trent Bridge on Thursday.

However, One-Day Cup holders Somerset ended the defence of their 2019 trophy with defeat at Warwickshire.

Glos profit from Group A drama

All-rounder Graeme van Buuren took three wickets before striking 51 not out off 44 balls to help Gloucestershire ease to an eight-wicket triumph at bottom side Kent and give themselves a chance of going through.

Home opener Ollie Robinson made 75 but Kent crashed from 109-1 to 112-4 as Van Buuren dismissed Jack Leaning and George Munsey with consecutive deliveries.

They reached 218-9 but Gloucestershire eased to the target with more than 12 overs to spare, opener Chris Dent unbeaten on 112 on their way to 219-2.

However they knew it would not be enough for them to progress if Lancashire beat Essex.

The Red Rose had made 250-6 at Emirates Old Trafford, largely thanks to a fourth-wicket partnershipof 106 between Steven Croft (93) and George Lavelle (52).

A 13th List A century for former England captain Alastair Cook put Essex in the driving seat but they collapsed from 212-4 to 227-8 in the closing overs.

But all-rounder Harmer hit a magnificent 20 off the final four balls to get them to 250-8 from their 50 overs to tie the game and leave Lancashire fourth in the table, while Essex finished second.

Meanwhile Durham’s Graham Clark became the first player to pass 500 runs in this year’s competition as his 141 not out helped them beat Hampshire by nine wickets and top the group.

Hampshire recovered from 65-6 to make 225-9 at Chester-le-Street thanks to career-best List A totals from Felix Organ (79) and Tom Scriven (42).

Chris Rushworth reached 750 wickets in all formats as he finished his 10 overs with 4-37 before Clark’s third ton of this year’s competition, adding a record 211 runs for Durham’s second wicket alongside Scott Borthwick (71 not out) to take them to 228-1 from 40.4 overs.

The group’s remaining game between Sussex and Middlesex had little riding on it but 663 runs were scored at Hove, with the hosts defending their 333-4 to win by three runs.

In reply Middlesex got a great start, opener Max Holden making 94, but they went on to lose regular wickets and failed to get a required 14 to win off the final over as they finished on 330-8.

Job done for Surrey & Yorkshire in Group B

Nottinghamshire started the day in second place in Group B but were always likely to drop out of the qualification spots with several sides queuing up behind them.

Yorkshire managed to defend 230 all out at group winners Glamorgan – it could have been worse for the visitors, who were 132-7, but 53 from Jonny Tattersall and Matthew Waite’s fine 44 gave them hope.

Three wickets apiece from Joe Cooke and James Weighell had put Glamorgan in the box seat and they looked set to win on 180-1 into the final nine overs, but three wickets in two overs from Yorkshire’s George Hill turned the tide and, despite Nick Selman’s 92, the Welsh side could only reach 226-8 to miss out by three runs.

Surrey breezed to an eight-wicket win at Derbyshire to book their place in the knockout stages.

The hosts scrambled to 215 from 46.2 overs, Daniel Moriarty the pick of the Surrey bowlers with figures of 3-44 while Conor McKerr also took three wickets.

A second century of the competition for Ryan Patel took Surrey to 219-2 after just 37 overs, the opener not out on 111 alongside Tim David, who was unbeaten on 52 from 38 balls as he backed up his 55-ball ton on Tuesday.

Somerset needed a favour to have any chance of progressing but lost to Warwickshire by three wickets at Taunton.

In reply Josh Davey also took four wickets for Somerset but man of the match Lamb’s 92 was supported by several decent contributions as Warwickshire got to 289-7 with an over to spare.

In reply Northants lost their top three in quick succession and had no-one go on to make a big score as they reached 261-9 from their 48 overs.