David Lynch’s Movies, Ranked Worst To Best (According To IMDb) 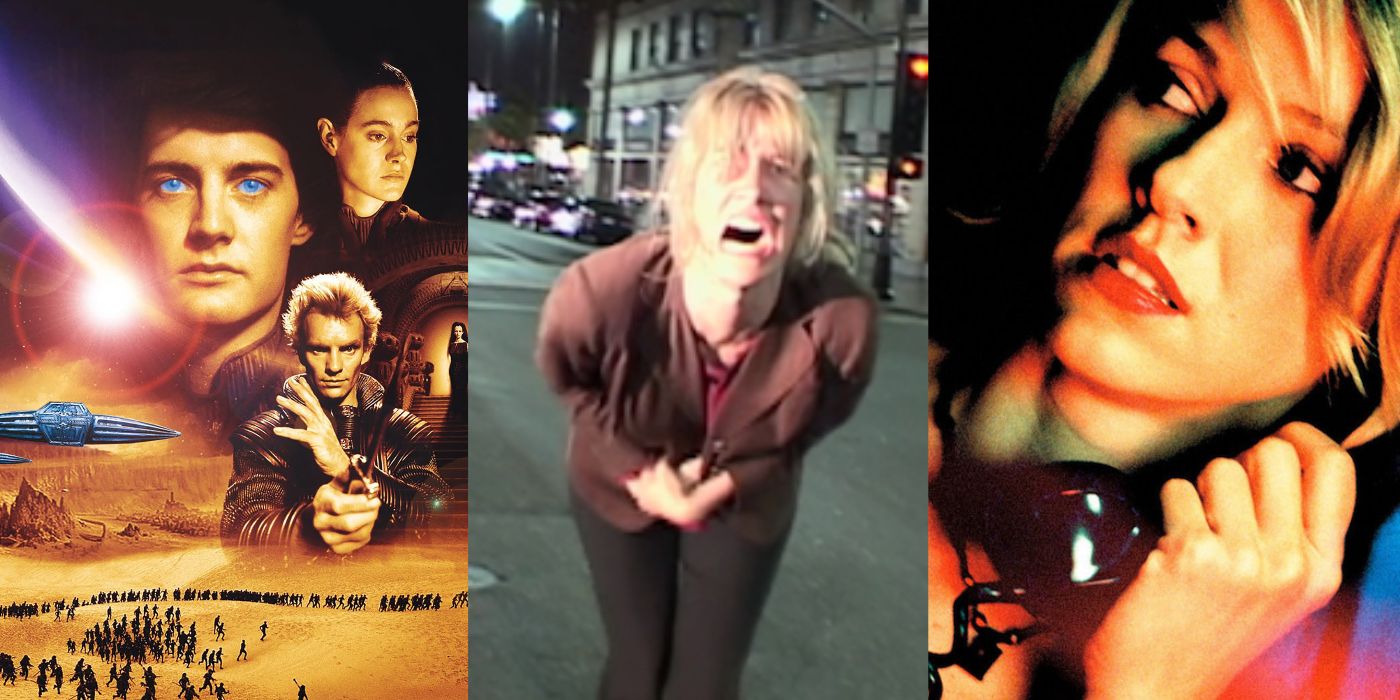 A maestro of cinematic surrealism, writer-director David Lynch has explored several absurdist projects all through his career ranging from classics like Blue Velvet and misfires like Dune, satirical shorts like Rabbits to a spine-chilling TV mystery like Twin Peaks.

Over the years, Lynch has garnered a cult fanbase with his unique style of dream imagery, metaphorical stories, and a so-called “Lynchian” atmosphere. Even though he has dabbled in several genres, mystery and horror seem to be mainstays in his career. His last feature film, Inland Empire, was released in 2006 but he has kept on garnering popular fascination with other works like music videos, short films, and of course, the revival of Twin Peaks.

An adaptation of the sci-fi epic of the same name, Dune was one of David Lynch’s most ambitious productions. It dealt with the conflicts of noble families over Arrakis, the desert planet. Unfortunately, Dune didn’t receive positive reactions from critics and audiences. With that being said, Lynch himself has famously never really liked the theatrical cut due to studio interferences.

Over the years, three different versions of the film have been released and some fans have had a change of heart. Furthermore, the upcoming Dune by Denis Villeneuve has regenerated interest in Frank Herbert’s novel.

Inland Empire stars Lynch regular Laura Dern as an actress in the role of an adulterous woman. As she gets more and more into character, bizarre events start happening in her life erasing the gap between what is real and what is surreal.

RELATED: Laura Dern’s 10 Most Memorable Roles, Ranked From Most Villainous to Most Heroic

The 3-hour-long feature ends up providing some genuine scares too in its heavily experimental approach. David Lynch shot the entirety of Inland Empire with a handheld camcorder, leading to low-resolution footage adding to the chaotic tones of the film.

Wild At Heart might not be as bizarre as the other entries on this list but it still benefits from some unexpected creative decisions and metaphorical allusions, vastly changing some portions of Barry Gifford’s novel of the same name.

The road film/dark comedy features Laura Dern and Nicolas Cage in the lead roles as two lovers on the run after the heroine’s tyrant of a mother sends goons after them. The typical Lynchian sense of weirdness and discomfort is definitely there but it is exuded by the film’s characters, who rarely talk or feel like actual humans.

Serving as both a prequel and a sequel to Lynch’s iconic ’90s series Twin Peaks, the psychological thriller explores two cases of murder in different timelines with most of the TV cast reprising their roles.

In the same vein as other David Lynch movies, Fire Walk With Me wasn’t universally well-received and turned out to be a box office failure in the US. And yet again like other Lynchian films, its status has bettered with time with more revised and positive takes being offered.

David Lynch’s debut indie film is also considered to be one of the finest sci-fi movies of the 20th century. Conceptualized and directed during his student tenure at the American Film Institute, Eraserhead was a low-budget production that gained popularity through word of mouth, entertaining and surprising audiences at midnight screenings.

The general premise revolves around a man dealing with the birth of a deformed lizard-like child. The nightmarish premise, the grotesque makeup, bold sexual themes, and multi-layered sound design were enough to disgust and enthrall viewers while cementing Lynch’s legacy as an unconventional director.

● Available for purchase on Prime Video

Given its dimension-defying, time-shifting storyline, it’s difficult for viewers to get the hang of Lost Highway in a single viewing. But maybe having multiple viewings with multiple interpretations forms the essence of a typical David Lynch film.

Branded as a neo-noir, the film starts off with two parallel storylines both involving adultery as a dominant theme. Even though Patricia Arquette stars in both scenarios, the stories are thought to be separate. As expected, when the connections become more evident, chaos ensues.

Blue Velvet is quintessential Lynchian cinema, blending all of his preferred genres at once, from psychological horror to film noir. It slowly builds up from the discovery of a severed ear that drives a college student (regular collaborator Kyle MacLachlan) down a dark rabbit hole of mystery, romance, and violence.

The film is notable for re-launching Dennis Hopper’s career (who plays the antagonist Frank Booth) and for getting David Lynch his second Oscar nomination for Best Director. It continues to be one of Lynch’s most popular and talked-about features.

Arguably one of the best thrillers of all time, Mulholland Drive earned David Lynch his third directing nomination at the Oscars and appeared on several critics’ year-end lists in 2001. Naomi Watts plays an actress who moves to Los Angeles and befriends an amnesiac (Laura Harring) who seeks to get over a traumatic car accident. More storylines and vignettes intersect drawing in Hollywood director (Justin Theroux).

The result is an ominous, atmospheric noir with a plethora of open-ended interpretations. Lynch himself hasn’t been very vocal about Mulholland Drive‘s true meaning, leaving it open for debates and discussions among cinephiles.

Interestingly, David Lynch’s least surreal film has one of the highest IMDb ratings. The Straight Story is different in many ways. It finds its director chartering a heartwarming, family-friendly territory rather than his usual nightmarish world. This Disney-produced venture has Richard Farnsworth playing the lead, an old man who wishes to make amends with his ill and estranged brother.

Unable to renew his license, owing to his impaired vision and legs, the protagonist ends up traveling from Iowa to Wisconsin on his snail-paced lawnmower. The result of this journey is a sentimental yet realistic road film set in the Midwest.

In his sophomore effort following Eraserhead, Lynch relied on a more grounded narrative dramatizing the life story of Joseph Merrick (named John Merrick in the film and played by John Hurt), a man who was tragically exploited for his medically abnormal facial features. The film serves as an empathetic portrayal of his time at a circus freak show and how a British doctor (Anthony Hopkins) helps him get a job at a hospital.

The Elephant Man can be an unsettling watch given how David Lynch’s Oscar-nominated screenplay is willing to show the brutal realities and judgment that people like Merrick have faced in history.

NEXT: David Lynch’s 10 Best Movies, According To Rotten Tomatoes

Shaurya Thapa is an Indian freelance journalist who mostly dabbles in writings on cinema, music, and human interest features. When it comes to Screen Rant, he writes lists on a wide array of subjects ranging from international films to mainstream Netflix series and comic book trivia. He also hosts a podcast called ‘BhindiWire’, an Indian parody of IndieWire.