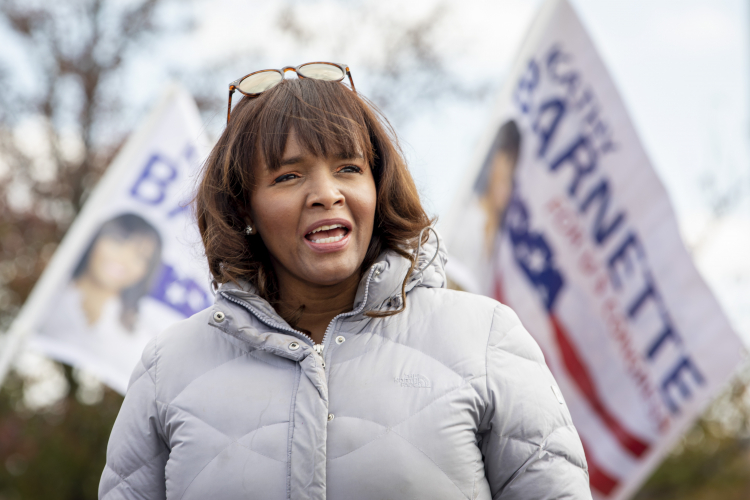 When Kathy Barnette declared her candidacy for Pennsylvania GOP Sen. Pat Toomey’s open seat, she tweeted that she is “running to become the first Black Republican Woman elected to the U.S. Senate.”

Raised on a pig farm in southern Alabama with no insulation or running water, Barnette turned heads last month when her Federal Election Commission campaign finance report revealed that she outraised Jeff Bartos and Sean Parnell, both considered front-runners in the GOP primary. Barnette’s campaign took in more than $591,000 from 900 mostly out-of-state contributors.

To prevail in the primary, followed by a competitive general election, Barnette would have to score wins among conservative voters in deep-red counties who didn’t necessarily turn out for Trump in 2020. Her campaign, moreover, would require making inroads among enough ticket-splitting suburbanites who reject both the GOP’s embrace of Trump and the Democratic Party’s leftward direction on issues like political correctness and public safety.

It’s a daunting task for any candidate in this ideologically fragmented state. But it’s especially difficult for Barnette, whose rise as a GOP Senate contender followed her questioning of last year’s congressional election results.

As the Philadelphia Inquirer recently reported, last November “Barnette and her supporters started knocking on hundreds of doors in … Montgomery County, looking for evidence her defeat was tainted.” No doubt, this will not bode well in Pennsylvania’s sizable and Democrat-controlled suburbs, where voters fueled Biden’s statewide win.

Barnette, who criticized the Inquirer report, countered that she raised over $1 million – the average donation was $55 – in a heavily Democratic district. “I had more Democrats who voted for me than voted for President Trump,” she told me.

In 2016, Toomey won reelection by following the Republican playbook that has evidently worked for decades in the Keystone State: gain suburban support through an emphasis on fiscal conservatism. As a self-branded culture warrior, Barnette is a dramatic contrast – and perhaps what the state’s most rightward-leaning voters seek. When asked if the GOP should be the party of tax cuts, she responded, “I hope not,” subsequently invoking the late conservative media mogul Andrew Breitbart’s “politics is downstream from culture” slogan.

As it stands, Barnette is focused on three priorities. She believes the Constitution – especially the first and second amendments – is “under assault” by the Biden administration. Fighting critical race theory, followed by addressing freight costs and material shortages, are Barnette’s second and third top issues.

Discussing CRT, Barnette said that she “would join the chorus of voices within the House as well as the Senate who are proposing legislation to ban it.” She added: “No federal dollars should ever be spent on teaching our children to hate themselves – to be racist against their fellow Americans.”

Throughout Pennsylvania, parents with children in K-12 schools have protested “anti-racism” curricula, which has polled as an issue of concern among voters. It may be a winning issue for Barnette and her fellow GOP candidates, such as Parnell, a retired U.S. Army infantry captain who recently told Fox News that the dogma “shouldn’t be anywhere near our military.”

As someone who has worked in the financial industry, including for Bank of America, Barnette is the sort of Republican one might see as a friend of Big Tech and big business. But she supports repealing Section 230 of the Communications and Decency Act, which provides legal immunity for websites if they remove content. She also believes in enforcing antitrust laws, such as breaking up tech companies.

“These are very large platforms of how people choose to express themselves,” Barnette told me. “A huge part of our freedom of speech is the platform most people use to speak on and to share their ideas. I believe every honest observer sees the bias.” She lamented social media companies’ de-platforming of Trump.

The former businesswoman, however, took a more free-market position when asked about the potential negative implications of companies like Amazon moving into communities, including the closure of family-run business closures and social isolation.

Does Barnette believe there should be more corporate regulations in Pennsylvania?

“I am for free enterprise, and if these businesses do well, and as the market judges them … this is what they want to bring into their communities, then the government should not necessarily infringe upon that,” she said.

Barnette views the clash between big and small businesses “as more of a local issue versus federal issue” since “local business, local ordinances, have the opportunity to vote on whether or not they want to bring these big boxes in.” Such a policy position doesn’t align with most figures on the populist right, such as Missouri Sen. Josh Hawley.

In addition to the national debate over corporations, Pennsylvania figures crucially in the fight over expanding voter ID laws.

In late July, the state’s GOP legislators announced their reintroduction of an election reform bill that includes requiring voters to produce a valid ID at polling places. Democratic Gov. Tom Wolf, who vetoed a similar bill in June, has since said that he’s open to new voter ID requirements. Polls, including a recent Franklin & Marshall survey in Pennsylvania, have shown voters overwhelmingly support ID mandates.

Barnette, too, supports them as a matter of practicality.

“I don’t know one black person who does not have an ID,” she said. “And I know a lot of black people across different educational backgrounds, different ZIP codes, economic situations, socio-economic strata.” Barnette, evidently expressing her views on the 2020 election, also said we “need to clean our voter rolls” since “dead people being allowed to stay on is ridiculous.”

Barnette hopes to win a GOP primary in a state where Trump signage, even today, decorates the roadways of working-class communities. Can she ride this enduring enthusiasm all the way to the Senate? It remains to be seen, especially in a state with a long tradition of rewarding political moderation.

Gabe Kaminsky is a writer for The Federalist. His work has appeared in the American Mind, RealClearPolitics, the Daily Wire, The American Conservative, and other outlets. Follow him on Twitter.