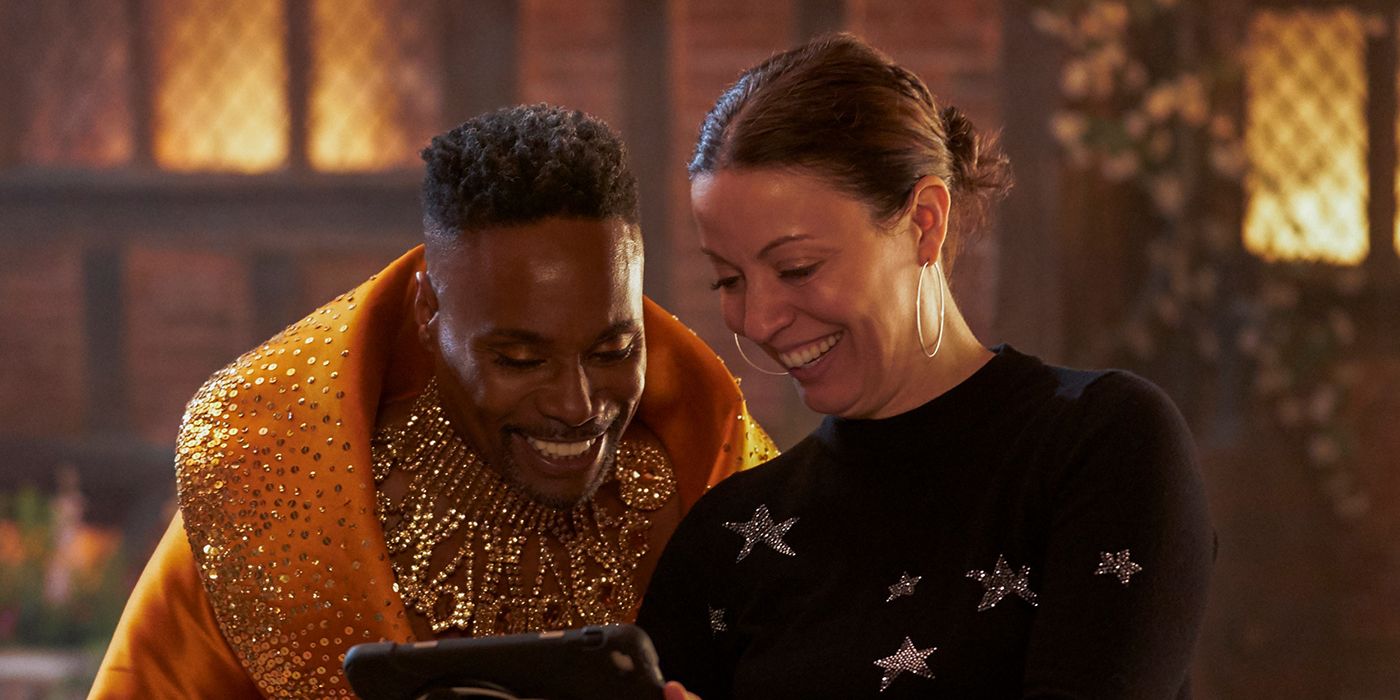 Writer/director Kay Cannon (Pitch Perfect, Blockers) has re-envisioned Cinderella as a modern musical with a heroine at its center who has ambitions of a career in a world that just wants her to find a prince to marry. Ella (pop music superstar Camila Cabello) wants to design beautiful ball gowns while her stepmother (Tony Award winner Idina Menzel) unsympathetically attempts to squash her dreams, until her fairy godmother Fab G (Billy Porter) shows up to help boost the confidence she already has in her heart.

During this 1-on-1 interview with Collider, Cannon talked about reimagining the most iconic underdog princess story, what made Cabello her Cinderella, being a fangirl of Menzel, rebranding the fairy godmother character, who she would have asked to play Fab G if Porter hadn’t said yes, creating the ball gown and glass slippers, and keeping an open mind for what could come next.

Collider: So many fairy tales, and especially princess fairy tales, are old-fashioned and a bit misogynistic and sexist. Why did you think it is that people don’t often update them or make them feel more contemporary?

CANNON: Especially with Cinderella, which is just the most iconic underdog princess story of them all, it’s hard to fight against people who love that story. I was not one of them. I didn’t grow up being a fairy tale person. I think there was something inside me that was like, “It just seems like a bunch of ladies being mean to each other,” or a she’s just waiting to be saved kind of thing. I was more of an E.T. person. And there’s been so many wonderful, awesome movies that have already retold it. So, for me, it started as a writing gig, and then it became something else.

This is a Cinderella that is independent, outspoken, and confident. What was it like to cast her and what was it that made Camila Cabello your perfect Cinderella?

CANNON: When I watched her “Havana” video, I was like, “Oh, she’s interesting. She is okay being goofy, or making yourself look goofy.” And then, I watched her L’Oreal commercials, and she’s doing a dance to a Queen song, and I was like, “There’s something about her.” So, I was really taken with her, initially. I thought, “She’s comedic, she has good comic timing, she gets it.” And then, when I met her and thought about her for Cinderella, I thought, “Here is somebody who came to the United States, at five or six years old with her family. They didn’t have anything. They started from nothing. And she had big dreams. You get a sense when you meet her that she has big dreams for herself and she went after those dreams. There have been times in her short life where she’s picked herself and it was a hard decision for her to do that. I felt like she is Cinderella and she’s had her own version of a Cinderella story, so it just made sense. I am so happy she said yes because I could only wrap my head around her as the part, when it really got serious.

RELATED: Camila Cabello’s ‘Cinderella’: New Images Remind Us the Premiere Is Just Around the Corner

What was that meeting with her like? How did she respond to the possibility of this? Was there anything that she wanted out of this character before she’d say yes?

CANNON: Yeah. She was so thoughtful. She had read the script, and I had had a meeting with her and the producers, and all of her people, initially, and she was on board. I showed her a sizzle reel and what I was trying to do. And then, I got a call that was like, “Camila wants to meet with you and talk about the vision of the movie.” So, I flew to Miami and that’s when it got really serious. I really appreciated that because she wanted to get to know me and I wanted to get to know her. I think it was smart to meet each other again and to figure out if it was right, if it was a match, and if it was gonna work. And it did. She would pitch jokes, and she understood the storyline and her character really well.

The world knows about her talents as a singer, but what most impressed you about her acting abilities, once you saw her on set and living in this character?

CANNON: She’s so coachable. I just said to her, “Your job in this scene is just to listen,” and she does it. She takes it in and she’s very natural. She’s a really great listener and she works really hard. She’s got all of this really raw, natural talent that you don’t have to work at. It’s just in her. What I had to do for her, in helping her with this first role is, she’d do a scene with Pierce Brosnan and be like, “I am in a scene with Pierce Brosnan.” That can be very intimidating with somebody who’s James Bond, when you’re new to the acting side. So, I was just helping her through all of that, navigating that.

She’s a powerhouse in her own right, but then you give her a duet with someone like Idina Menzel, who is the queen powerhouse. What was that like? How did you come to Idina Menzel as the stepmother?

CANNON: Yeah, I really wanted to lean into Tony-winning Broadway actors whose talent is so undeniable. I have to admit that I’m such a fangirl of Idina’s. Twenty-something years ago, I sat outside in the rain in New York City, so that I could get $20, cheap house seats to see Rent. I was in the second row, soaked, specifically for her. I remember Joan Rivers sat behind me. I’ll never forget it. I thought, “Oh, she is just incredible.” And so, one of my favorite moments in the movie is when Cinderella and the stepmother are singing “Let’s Get Loud” to each other in the finale, and they apologize to each other, and it’s Vivian, the stepmother, giving in to her, and then she hits that big note. I told Camila, “React to that. That’s the Idina special.” And so, you see Camila taken aback. That woman is just incredible.

Billy Porter is absolutely brilliant in this and I love that you get to rebrand the fairy godmother as Fab G. Was there a backup plan, if you couldn’t get him to do this?

CANNON: Luckily, I didn’t have to think of a backup plan. There were so many things that were so hard about the shooting of this movie, with COVID and everything, and movies are just hard. A lot of things can go wrong. Casting Billy Porter, and him coming in and shooting it, was one of the easiest things, ever. Shout out to Lizzo because I think Lizzo would have been my second choice. If Billy said no, I was just like, “Somebody get Lizzo on the phone,” because she’s so special and she’s so wonderful. The Fab G was one place where I really felt like I could modernize the story.

Now I need a sequel with Billy Porter and Lizzo teaming up.

One of the things that carries over from the traditional Cinderella is the ball gown and glass slippers. What was it like to get to create that and see that brought to life?

CANNON: Ellen Mirojnick, who’s an amazing costumer and our costume designer, did the 1997 Whitney Houston/Brandy Cinderella, which is just incredible. I said to her, “Why do you wanna do another fairy tale? You’ve done it. You’ve made the dress.” And she was like, “I like what you’re doing. I like this modern version.” I think she might’ve thought it was gonna be a piece of cake, but she panicked in the middle of the night, about making the dress. I wanted the dress to be modern. I wanted it to have a simple structure tha twas different than all of the other dresses because all of the other dresses are beautiful too. It had to have a modern feel to it. And it was coming from the brain of Cinderella, where she could design it, but she couldn’t make it herself. That was a pretty big ask for Ellen to figure out and design, and I thought she nailed it. It was stressful. There was a last minute reveal of what that dress was gonna be, but I think it’s beautiful. It does have that modern structure and feel to it.

I also really appreciated how you addressed the fact that glass slippers are not easy to walk in. Why was that something you wanted to do?

CANNON: Christian Louboutin is on the record as saying that shoes have to be uncomfortable. “They’re either sexy or they’re comfortable, and I make sexy shoes.” I’ll never forget that because I was like, “Really? Do they have to be uncomfortable? Can’t we figure out both?” So, that’s where that was coming from. I was just like, “A glass slipper? That would be the most uncomfortable thing to walk in.”

So, what’s next for you? How do you follow up a princess fairy tale?

CANNON: I have no idea. I’ve got K&L Productions, my production company, and we’ve got a slate of things that I’m attached to. But I just wanna get some stillness and try to figure out what it is that I wanna say and what makes my heart pitter-patter. We’ll see. I’m keeping an open mind.

Cinderella is available to stream at Amazon Prime Video.