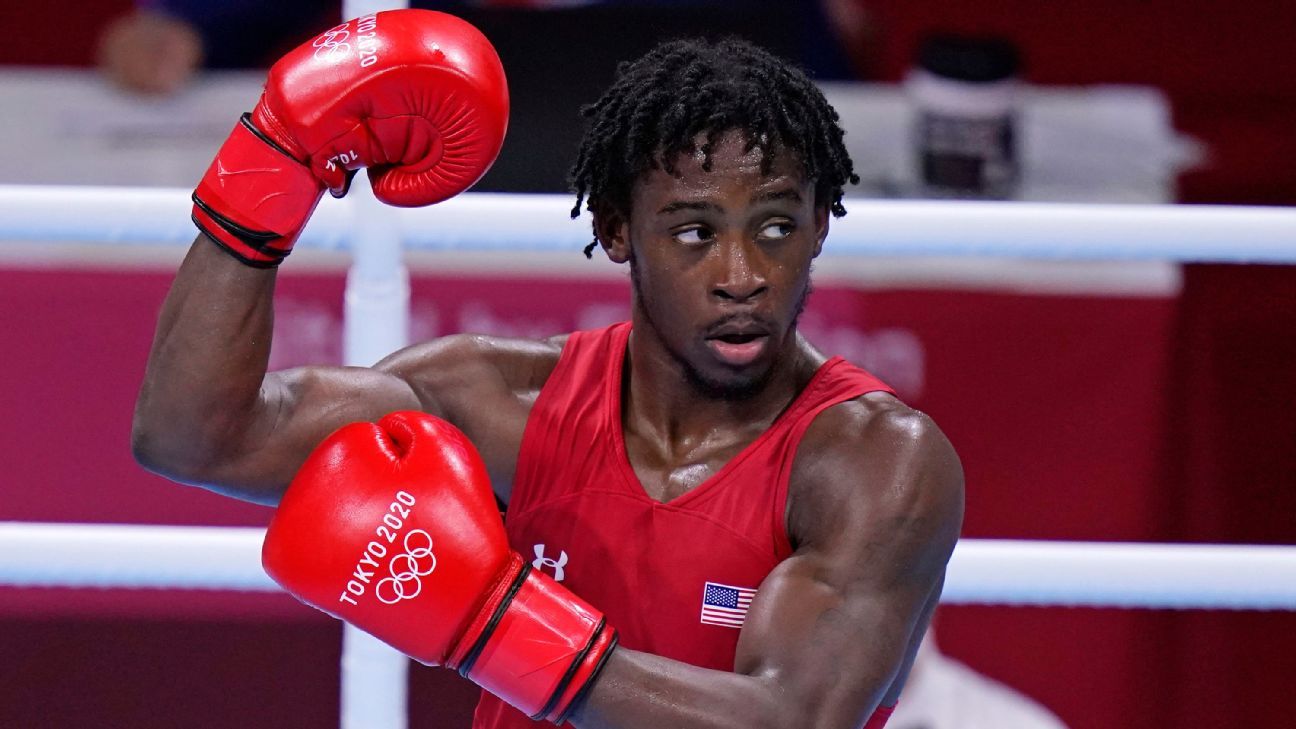 For decades, Team USA was the standard-bearer of Olympic boxing, a factory of future heavyweight champions no matter the weight class.

Floyd Paterson won middleweight gold at the 1952 Helsinki Games before capturing the heavyweight championship. Eight years later, Cassius Clay claimed light heavyweight gold in Rome and went on to become Muhammad Ali. More gold followed at heavyweight in each of the next two Games: Joe Frazier in Tokyo (1964) and George Foreman in Mexico City (1968).

Hall of Fame fighters like brothers Leon and Michael Spinks, Pernell Whitaker and Oscar De La Hoya continued the gold rush into the ’70s, ’80s and ’90s. Andre Ward, another Hall of Famer, carried it into the 2000s, but all has been quiet over the last 17 years. No American man has won gold since Ward in 2004, though on the women’s side, Claressa Shields won gold in 2012 and 2016 while Marlen Esparza took bronze in 2012.

Now, three men are on the cusp of ending the drought: Keyshawn Davis, Richard Torrez Jr., and Duke Ragan.

Keep up with the Summer Games in Japan on ESPN: Read more »

“Wouldn’t that be wonderful?” Foreman told ESPN regarding the prospect of the American men claiming gold in Tokyo. “Nothing but great memories, it was a whole wonderful experience, because you hear so many things, but once you’re there, you’re overtaken by the spirit of the Olympics, I can tell you that. Overtaken.”

Ragan, a 23-year-old Cincinnati native, has the first crack at winning gold after defeating Ghana’s Samuel Takyi on Monday to advance to the featherweight final. Ragan (4-0, 1 KO in the pros) meets Russia’s Albert Batyrgaziev on Thursday (2:35 a.m. ET) with gold on the line.

Torrez and Davis are both assured of bronze, each one win away from their respective finals. Torrez, a 22-year-old from Tulare, California, fights Kazakhstan’s Kamshybek Kunkabayev on Tuesday at 2:18 a.m. On the other side of the bracket is the tournament favorite, Uzbekistan’s Bakhodir Jalolov, facing off with Great Britain’s Frazer Clarke. The winners will vie for gold Sunday at 2:15 a.m.

Then there’s Davis, the 3-0 pro viewed as a future champion. The 22-year-old scored a stoppage to advance to the quarterfinal, then outpointed Russia’s Gabil Mamedov on Monday. The Norfolk, Virginia, native fights Armenia’s Hovhannes Bachkov on Friday (1:32 a.m.) in the lightweight semifinal.

Cuba’s Andy Cruz, who is 3-0 vs. Davis in the amateurs, fights Australia’s Harry Garside in the other Friday semifinals matchup. Despite Cruz’s dominance, Davis is confident his time in the pro ranks will give him the edge in a potential fourth meeting.

“These guys can’t beat me,” Davis told ESPN before the tournament started. “I’m the best in the tournament. … If I don’t wanna get hit, you’re not going to hit me.”

This is actually the first time Team USA has allowed pros to compete in the Olympics, spurred by the COVID-caused cancellation of the Americas Olympic Boxing Qualifying Event that was scheduled for May in Buenos Aires.

Three pros — Davis, Ragan and Troy Isley — joined the team in Tokyo. The trio were set to represent Team USA in Japan last summer but when the pandemic delayed the Olympics, they all decided to turn pro. Now two of them, along with one amateur in Torrez, have the opportunity to end this nation’s fistic misery.

Three chances to end the drought. Surely one of them will continue the great tradition legendary fighters like Ali and Foreman built before them. The wait could soon be over.