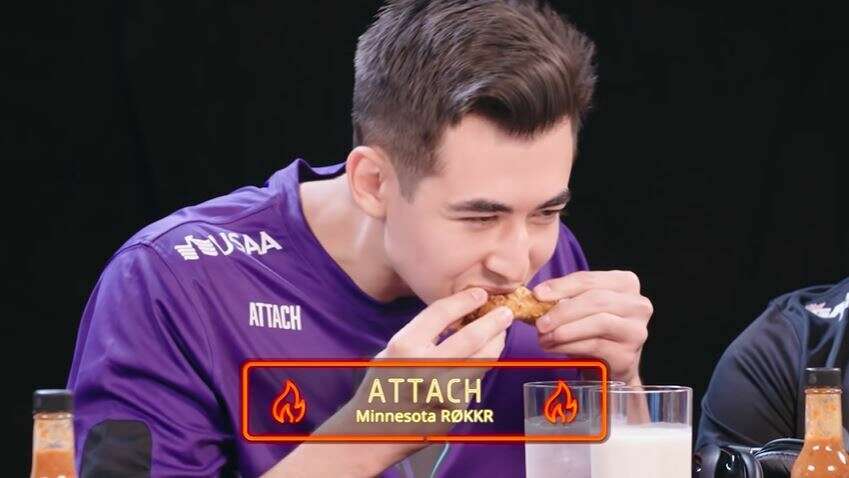 Pro players were put to a different kind of Call of Duty test in a special episode of Hot Ones with Sean Evans. In this episode, three of Call of Duty’s pro players are in the hot seat, featuring Attach of the Minnesota ROKKR, Asim of the New York Subliners, and Apathy of the Los Angeles Guerrillas in a head-to-head “Dab of Duty” challenge.

Normally, celebrities would be sitting across from Sean Evans, eating the hottest wings and trying to answer his spiciest questions. Instead, these popular Call of Duty pros had to eat wings doused in Hot Ones’ The Last Dab Apollo hot sauce, and then proceed to compete against each other in Call of Duty.

The players were served a plate of hot wings in the spiciest Last Dab Apollo sauce. They were challenged to first eat the wings, and they were then given five minutes to see who can get the most kills in a match of Black Ops Cold War using only a knife or tomahawk. I think this was a missed opportunity to ask some of the spicy questions about their teams and some behind-the-scenes pro league drama, but it was still fun to see them sweat it out in a match of Call of Duty, quite literally.

Apathy seems to be struggling the most with the heat, announcing that his “tongue is sweating,” but the Guerrillas pro player was still able to secure the win. He finished the Dab of Duty challenge on top with 27 kills, Asim trailed with 16, and Attach finished in third place with 15.

This special Call of Duty episode of Hot Ones is a lead up to the biggest Call of Duty League tournament of the year. Call of Duty League’s Championship Weekend will run from August 19-22. Eight of the top teams from the regular season will fight for the year’s biggest prize at the Los Angeles’ Galen Center, which is the championship trophy and a hefty $1.2 million cash prize.

Call of Duty’s Season 5 is arriving on August 12 to Black Ops Cold War and Warzone, bringing new weapons, operators, and more. You can get a better look at some of the new cosmetics coming to Call of Duty in today’s Season 5 battle pass trailer.