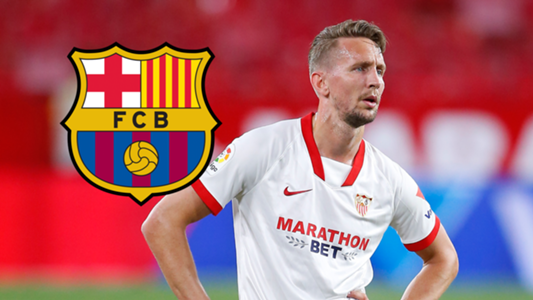 Barcelona have confirmed the signing of Luuk de Jong in a loan switch from Sevilla with an option to make the move permanent next June.

The 31-year-old joins up with the Blaugrana after spending two seasons with Sevilla, where he failed to find his best scoring form.

De Jong will provide cover at forward, where Barca have been lacking for options after the departures of Lionel Messi to Paris Saint-Germain and Antoine Griezmann back to Atletico Madrid.

The Dutch international joined Sevilla ahead of the 2019-20 season on the back of several prolific campaigns with PSV.

But the forward was unable to replicate that form in Spain, scoring a total of 10 league goals over two seasons in 69 appearances.

De Jong has also played at De Graafschap, FC Twente, Borussia Monchengladbach and Newcastle over the course of his career.

At Barcelona, De Jong will be reunited with his former national team boss Ronald Koeman, now in charge of the Blaugrana.

Koeman had been hoping for reinforcements up front, where Martin Braithwaite and Memphis Depay have started each of the club’s first league matches alongside Griezmann.

De Jong has earned 38 caps for the Dutch national team since making his debut in 2011, and made two appearances for his country at Euro 2020 this summer.