Attacks on masks in schools aren’t just about masks, they’re an attempt to destroy public education 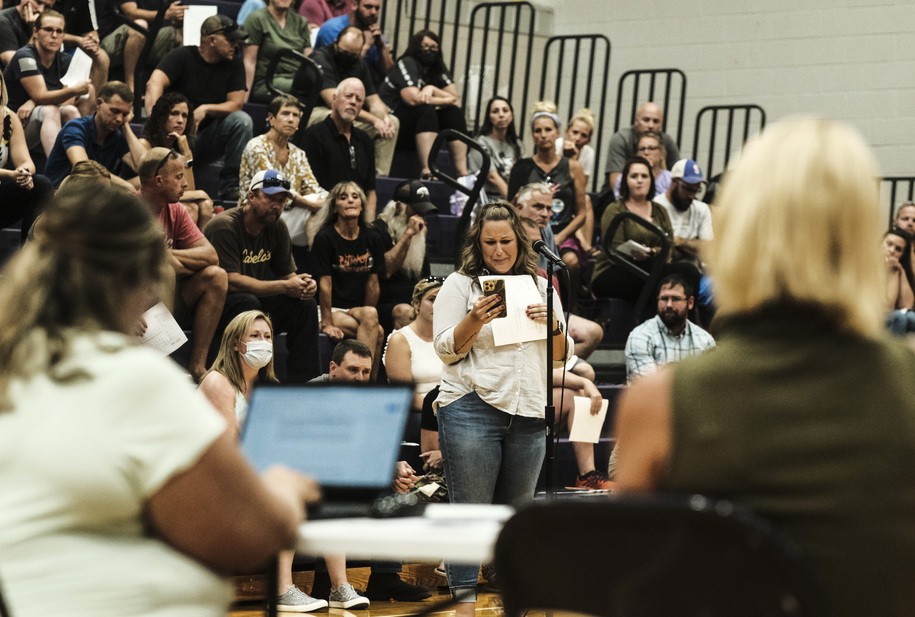 It’s not clear when school boards became the Platonic ideal of the small town democracy, but somewhere, back in the mists of time, an election to a school board seat became a spot from which both those whose political desires didn’t go past seeing that there was something healthy on the lunch menu and those whose campaign signs might as well have advertised the role as “stepping stone” converged. School boards have never been free of controversy, and local boards have come under broader scrutiny for an array of issues. What’s happening now isn’t exactly new, but it has changed in both scale and tenor.

As the New Hampshire Union Leader reported in July, board members have now found that rather than local parents, their meetings are being driven by members of white supremacist militias like the Proud Boys. Those militia members didn’t show up to talk about the lunch room budget, they came making claims about “Marxism.”

As NBC News reported, just last week, three men attempted to zip tie and kidnap the principal of a Tucson, Arizona, high school. The incident came when the son of one of the men was asked to quarantine after being exposed to a known case of COVID-19. Two of the three men did not have children in the school—they just came for the violence.

That these men would immediately shift to violence is completely in line with the behavior seen at schools and school board meetings across the country. That’s because what’s happening in school board meetings isn’t a spontaneous movement of local parents concerned over the nonexistent threat posed by masks, it’s a coordinated attack by right-wing “think tanks” and media that have been coordinating this assault for months, driving home messages that masks are signs of oppression, not tools in blocking the spread of disease. Those messages make it clear that those coming to make threats don’t have to be a parent, and that if they don’t know what to say, they will be told.

The message being spread to the right about masks is that they are useless, dangerous, “virtue signaling,” and a symbol of submission to unreasoning authority. But what’s going on at school board meetings, even those where masks become the subject of violent threats, isn’t really about masks. It’s more about this: Shutting down public schools and making it impossible for public education to operate.

As the Texas Tribune reports, at least 45 school districts in Texas have been “forced to temporarily stop offering in-person classes as a result of COVID-19 cases.” Those shut downs came after over 20,000 Texas students tested positive for COVID-19 in the first two weeks of the school year.

The same thing is happening in Florida, where the Florida Phoenix reports districts in five counties “drowning” in cases of COVID-19.  With just six out of 67 districts reporting, 28,000 students and school staff were in quarantine after testing positive or being exposed to COVID-19. The result was a cascade of schools being forced to close as children became ill and there were insufficient staff and teachers to conduct classes.

By no coincidence, those two states are among the ones where Republican governors—Ron Desantis in Florida and Greg Abbott in Texas—have made forcing schools to conduct in-person education with no mask mandates and no vaccination requirements the forefront of their agendas. They’ve both placed the trap for public education, and sprung it.

In both states, rules that allowed expanded distance education over the 2019-2020 school year have now ended. Mouth News reported as the start of the school year approached that it meant “distance learning is not an option when school begins.” Schools are required to conduct in-person learning. Texas also failed to provide any funding for remote learning, leaving students—even those with immune disorders placing them at high risk—with few options but to face COVID-laden classrooms.

Those decisions were backed up by executive orders in both Texas and Florida that forbade school districts from requiring that either students or staff wear masks. Florida followed an executive order with legislation that requires that schools conduct in-person education except in the case of hurricane emergencies. That same bill also gives DeSantis the power to “invalidate” any local emergency order—so no matter how bad things become in a school district, DeSantis can order that in-person instruction continue. Despite Abbott’s desire in Texas, the legislature there disbanded without passing legislation that reinforced his mask mandate—but they certainly didn’t pass anything to stop it.

In Florida, DeSantis is now fining schools for asking for proof of COVID-19 vaccination, even though the Florida Department of Education requires that students be vaccinated against seven other diseases before they can start pre-school and requires multiple boosters and additional vaccines for elementary and secondary students. In Texas, Abbott also moved to personally block vaccine mandates at schools, even as the first vaccine was given full FDA approval. As with Florida, Texas requires vaccinations against a whole range of diseases before students are allowed to start school. But vaccinations against COVID-19 have been forbidden.

Put the picture together and what does it show? It shows this is not about masks.

Conservative groups, including white supremacist militias, are bringing in people to disrupt local school board meetings and to generate fear among board members. Those groups are not just prompting people on points of attack, they’re offering to provide them with whole speeches if they don’t have anything to say. The goal is to overwhelm these meetings, making ordinary school business impossible to conduct, as well as making board members fearful about staying in their positions.

Conservative states are blocking the use of masks in schools to protect students and staff. That includes fighting court decisions in favor of mask mandates, and in the case of DeSantis, pushing forward with fines on schools in spite of a standing court order.

Conservative states are blocking schools from requiring vaccination of staff or older students for COVID-19, even though such vaccinations are a routine requirement against a whole host of other diseases, from polio to hepatitis B. In Florida, schools are being fined if they ask for proof of vaccination from either staff or students.

Conservative states are requiring that schools conduct in-person classes, no matter how bad things get, and denying funding for remote learning. That’s being backed up with new legislation that strips cities and counties from exercising authority they always had in the past.

That doesn’t look like conservatives being concerned about masks. It doesn’t look like conservatives being upset about vaccines. What it looks like is conservatives seizing this moment to assault school boards and make the operation of public schools difficult, if not impossible. Schools will come out of this situation starved for cash by restricted funding and a series of fines. School boards will emerge fearful and fractured, as well as finding themselves subject to concerted efforts to replace members with MAGA hardliners. The whole of public education will emerge battered and diminished.

And just as a little icing on top of the cake, proof that vaccine mandates aren’t really a concern can be found in who is not being fined. As the Tampa Bay Times reported in May, the Centner Academy in Miami has long pushed anti-vaccine claims as well as a whole collection of conspiratorial weirdness. That school isn’t requiring that teachers be vaccinated, it’s requiring that they not be vaccinated, or risk losing their jobs. Somehow, an anti-vaccine mandate appears to be just fine.

Because this isn’t about vaccines. Or masks. It’s about Republicans seeing a road to a goal they’ve wanted for decades—even if that road is paved with sick children.