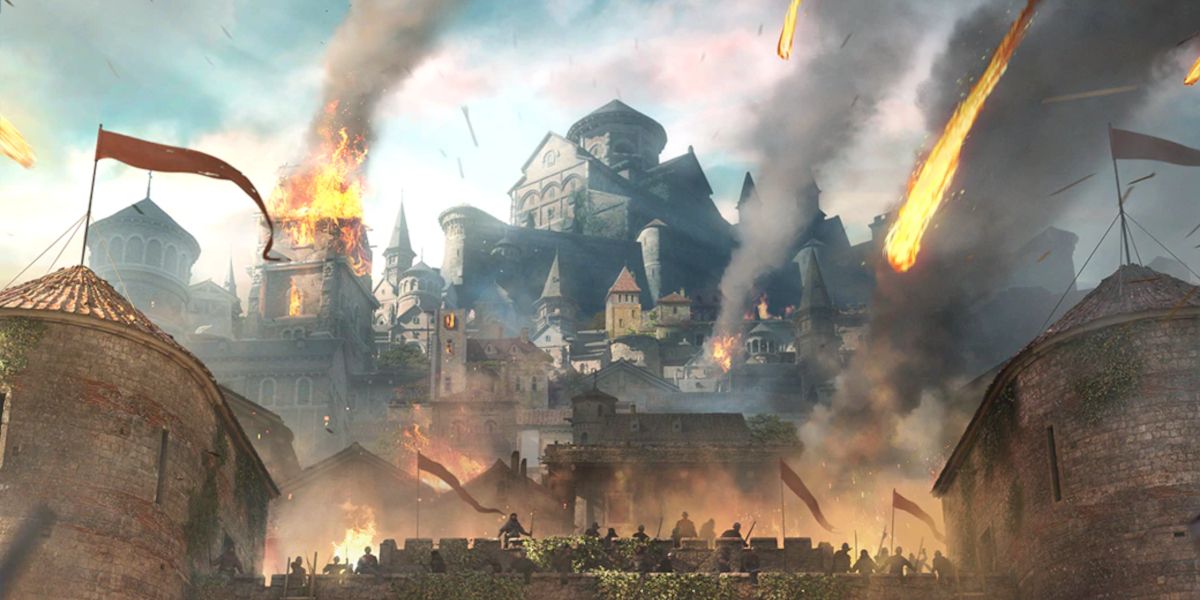 When Ubisoft’s Assassin’s Creed Valhalla first landed on shores all over the world, it promised players a chance to live out their own viking saga as the gender-fluid Eivor. There were bloody fights and river raids, sacrifices to the gods and backstabbing betrayals among friends and family alike, festivals, carousing, and more than a few chances for romantic entanglements. The sprawling, globe-spanning RPG was, perhaps, too big for its woolly britches. (I currently have 160+ hours in the game and still haven’t finished the main quest lines.) However, with the introduction of the DLC chapters “Wrath of the Druids” and “The Siege of Paris,” the latter available to play today, Assassin’s Creed Valhalla has found its footing, and Ubisoft may have found the path ahead for the franchise.

The core game of Valhalla takes the wolf-kissed Eivor on a journey of self-discovery and actual discovery of foreign lands in a bid for viking conquest. That adventure has taken Eivor from Norway to England, and beyond, including sojourns to Ireland in “Wrath of the Druids” and now Francia in, you guessed it, “The Siege of Paris.” But it’s these relatively short, contained, and breathlessly paced mini-adventures that really capture the original spirit of the Assassin’s Creed games and actually put some assassinatin’ back into the mix.

Spoilers AheadRELATED: ‘Assassin’s Creed Valhalla – The Siege of Paris’: Here’s How to Get Started

The story of “The Siege of Paris” is largely a slightly skewed version of actual historic events in the late ninth century. The City of Lights, back when those lights were sputtering torches and flaming braziers, played host to quite a few sieges over the years. “The Siege of Paris” isn’t even the first viking siege to assail the city’s walls, though the narrative does reference the legendary Ragnar and his vikings’ successful sack of the city. But for Eivor’s own part to play, things get a little more complicated.

The new DLC kicks off from Ravensthorpe, your home settlement in England where the ongoing Sigrblot Festival is currently taking place. You’ve probably already noticed a new addition to your growing hometown on the outskirts just past the festivities themselves; that’s where you’ll meet Toka Sinricsdottir and her Frankish companion Pierre, your DLC quest-givers. Much like “Wrath of the Druids,” you’ll be able to come and go to your home base or the DLC setting at will, but for my money, the immersion really sinks in when you stay in one place and run through everything the DLC has to offer.

And there’s plenty to do in “The Siege of Paris.” The titular event occurs roughly halfway through your 10-15 hour playthrough, with a helluva buildup, a fun series of frenzied events during the siege itself, and lots of unexpected drama after it’s all said and done. We won’t go into story spoilers much here except where they’re important to highlight just how fun, fast, and frankly Frankish “The Siege of Paris” can be. But before we get into the main quest a little more, let’s talk about some of the new additions and side content.

Running you about five hours, side content in this DLC is worth exploring. The missions aren’t quite as fun (or funny) as the ones in “Wrath of the Druids,” but they add a ton of context and content into the overall story. (Plus, the Ubisoft Montreal team has put a lot of loving detail into every pathstone and petal in “The Siege of Paris.” From the Plague District, to Poppy Fields, to Roman Ruins, yes you can see the reused assets from earlier Assassin’s Creed games, but put to use in ways that make you want to stop and explore what’s going on in each little ecosystem.)

The best side content is found in running down Mysteries, which include a new group of elite Frankish Nobles, a Legendary Animal fight, and more contextual stories about the tumultuous time in 9th century France. Less great, however, is Pierre’s Rebel Missions, repeitive fetch quests or beat ’em up missions meant to raise the rebellion’s infamy; this doesn’t really seem to impact the overall story much, but there’s some extra loot to secure here (and it might even improve your rapport with Pierre himself). Oh, and yes, the cairns are back… but they’re not nearly as bad (or as brutal) as the newly introduced Rat Swarms mechanic.

As much fun as 100%’ing Paris and its surrounding districts can be, the heart of “The Siege of Paris” is in the emotional and historical conflicts among the power players. Eivor has been brought in to help Sigfred, Toka’s uncle, seek vengeance for his slain kinsmen and burn Paris to the ground, no matter the cost. Toka seeks to find a way to secure a truce (and a viking fleet’s worth of silver) and avoid unnecessary bloodshed. Frankish nobles like Count Odo, King Charles the Fat, and Queen Richardis have their own parts to play in that saga, and of course you’ll cross paths with them as Eivor in numerous ways. If you think too hard about it, Eivor’s saga leans more towards a soap opera in this telling, but it’s fantastic getting to have a hand (or a blade) in political proceedings here rather than only acting from the shadows or on the battlefield in a distant role.

Make no mistake, however, there’s plenty of shadow ops and major fights to take on in “The Siege of Paris.” (I may have been overpowered for even the automatic difficulty scaling here, however; epic build-ups to anticipated one-on-one matches felt too brief and too easy.) The absolute best thing the DLC brings into the mix is the return of dynamic and varied assassination missions. Yup! The title of the game and the spirit of the originals is back in this DLC; you can actually skulk around the city, gather intel, and use it to infiltrate your way right up next to your assassination target. True, you can also bash and crash your way through the whole mission if you want to (or if things go horribly wrong), but choosing the more assassin-like options will treat you with narrative-driven cinematics and original dialogue scenes, plus a sweet kill cam for the final blow.

The overall story of “The Siege of Paris” was quite the enchanting one. You play a pivotal role in whether or not the vikings are successful (and just how much blood is shed in the process) and in what happens after the main event of the DLC. Other than reloading previous saves to see how different dialogue choices play out, I don’t think there’s an easy way to see how many branches “The Siege of Paris” has at the moment, but replayable missions may be available through the Mastery Challenges. There may actually be some weight to your actions and decisions here, something that “Wrath of the Druids” managed to do well by giving you agency over the story and avoiding the illusion of choice. I like that. And it’s the crown jewel in “The Siege of Paris” DLC, a worthy addition to Assassin’s Creed Valhalla and hopefully a sign of things to come for future titles.

KEEP READING: 9 Norse Mythology Games to Unleash the Ragnarok in Your Living Room

The film IS called ‘Don’t Breathe’ for a reason.