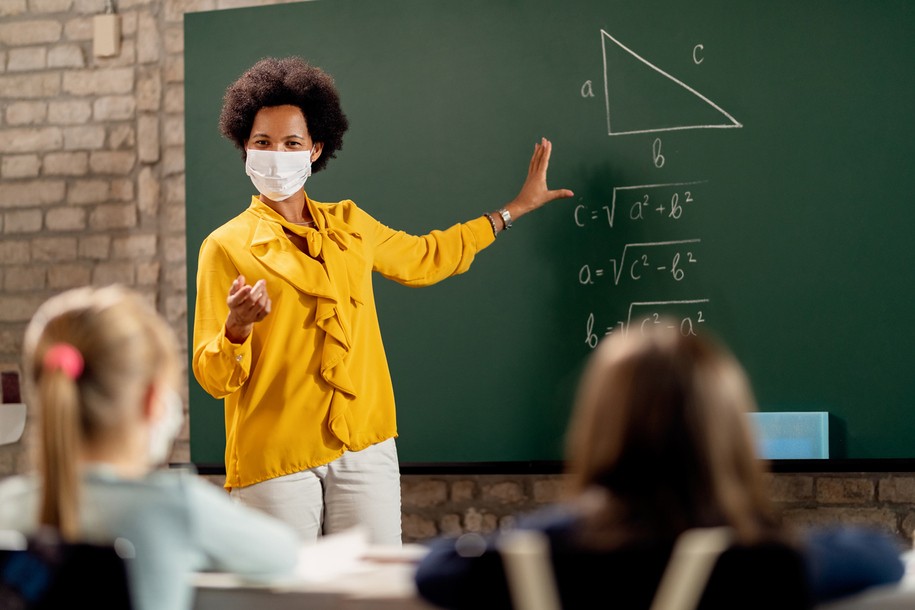 The teaching industry already suffers from high turnover, especially among Black teachers. Now, the pressure is worse as CRT moral panic spreads across parents and students. Coming on the heels of the stress from teaching during a pandemic, the fear, frustration, and exhaustion is proving too much and causing some educators, teachers, and administrators to leave the industry.

“[Teachers] are all bracing for this storm that’s here, but it’s going to intensify. Teachers are worried,” said Kyati Joshi, a teacher and trainer for teachers in New Jersey.

Societal changes are a major driving force behind conservative anti-CRT campaigns and the insecurities those campaigns represent. Demographic shifts highlight a growing rift between students, teachers, and politicians where students and classrooms are more racially diverse than they’ve ever been, but teachers are still overwhelmingly white, as are politicians. And those white teachers and politicians are acutely aware of how young people are a rapidly growing force in movements for social change like Black Lives Matter, defunding the police, abolishing ICE, immigration reform, and protecting the rights of trans and other gender-diverse people.

Jesse Hagopian, a high school teacher in Seattle, noted how youth participation in these social movements made it clear to teachers how incorporating conversations about what was going on in the world had to be part of their students’ education, including the fact that young people were rallying for public events against racism.

For many teachers, keeping conversations about inequality and the local community out of the classroom isn’t realistic. Hector Rodriguez has been teaching kindergarten through to fifth grade for over a decade, primarily in bilingual programs near the Texas border. Most of his students are from different African, Afro-Latino, and Latin countries, and their concerns echo young people across the country dealing with lived realities of inequality, including family members in detention centers, low-wage families struggling to get by, and racist harassment. CRT isn’t part of the curriculum, but students’ concern about racism and other forms of oppression is ever-present in his classroom.

“There’s moments where students have a lot of questions,” Rodriguez said. “It’s hard for them to comprehend the big societal mechanisms in play.”

Jania Hoover, a social studies teacher and department chair in Texas, has faced similar situations with her own students. After the Jan. 6 insurrection at the U.S. Capitol, she helped students process the insurrection in an elective course to provide a “safe space to process our questions and reactions to this event unfolding in real time.”

For teachers like Rodriguez and Hoover, it’s part of their responsibility as educators to help students develop their own understanding and perspectives of the forces shaping their lives, and anti-CRT bills actively hamper teachers’ ability to do their job.

“There are policymakers trying to take away an educator’s autonomy and what goes on in their classroom, which is disheartening and unfortunate,” Rodriguez said. “They should be serving the community; not dictating one blanket policy just because they’re afraid of societal changes.”

Adding to the confusion, some state statutes still require public schools to teach subjects like the history and experience of African Americans, so some administrators and principals don’t think the legislation will impact actual class content. That leaves the question of how those topics will be taught wide open to interpretation, which for many teachers is exactly the problem.

Rosalie Metro, an assistant teaching professor in Oklahoma, pointed out in an op-ed for Inside Higher Education how anti-CRT laws functionally ban teachers from teaching much more than critical race theory.

“Oklahoma’s law is written so broadly that it outlaws any form of education about racism, sexism or other forms of oppression,” Metro wrote.

The fuzzy definitions in those bills put teachers at risk, especially if what they say in class makes it home to parents through a garbled game of Telephone. Many teachers are now feeling pressured to rethink how they approach discussions that could be misconstrued as CRT, lest they face pushback from students’ families. Teachers are also being monitored: Tennessee and Arizona will fine school districts for teaching CRT, while Florida wants educators to register their political views. States like North Carolina have even opened portals for parents to submit examples of teaching CRT.

And the risks for teaching the “wrong thing” are big. Twenty-two bills or resolutions restricting CRT in K-12 public schools have been introduced, with five passed into law, with consequences for violations ranging from fines to termination of employment. School districts in underserved communities that often serve a majority of nonwhite students already struggle for funding, and fines for “teaching CRT” would hurt them even more. Teachers have also been fired under the guise of being too divisive. For nonwhite teachers, the loss of income and health benefits can be catastrophic, especially in the ongoing pandemic.

The irony, Hoover noted, is that the manufactured outrage and push to prevent CRT may be the exact reason students and more K-12 teachers hear about the theory in the first place.

“As a teacher, it’s such a gift when news headlines make it so much easier to make history relevant for my 11th graders,” she said.

That side benefit still won’t lessen the threat that many teachers are finding themselves dealing with, nor will it fill the educational craters left by these bills, which will primarily affect how, if at all, students will learn about Black, Indigenous, and other communities of color, queer communities, women, and other marginalized groups in history. To combat the harm this will cause students, especially Black and other marginalized students, teachers of color need the support and protection of their administrators and districts. But those measures have been alarmingly inconsistent, even as administrators are finding themselves in the crossfire as well.

Spreading across the school system

School administrators are already struggling to ensure the safety of students, faculty, and staff in another pandemic school year and amid rising COVID-19 infection rates from the delta variant among children. In districts where anti-CRT campaigns are especially focused, many teachers are frustrated by how school leaders have to deal with conservative outrage over a nonexistent problem in the midst of an ongoing health crisis.

“They’re trying to make sure kids will be safe and healthy at school,” Joshi said. “This is consciously distracting from them doing their job.”

School board meetings from Nevada to Pennsylvania and Georgia have turned into shouting and boxing matches. Even milquetoast diversity training and programs are inciting conservative rage. In Maine, a local resident also attempted to intimidate school board members when they hired a diversity consultant. Similar programs are also being attacked in Missouri and North Carolina, with parents in Pennsylvania and other cities actively petitioning to end diversity-related programs entirely. These attacks have made educators and trainers apprehensive to even mention the words diversity and inclusion alongside education and race.

For many, it’s simply too much. Rydell Harrison, a school superintendent in Connecticut, quit his job after attacks motivated by race and CRT, citing “the emotional and personal toll to be a Black man doing this work and facing very blatant attacks left and right.”

To combat outraged parents, some schools are releasing statements calling on their communities to stop harassing teachers and “spreading hate and shame,” and to protect teachers from being “attacked and questioned and judged.” However, exactly how school boards will hold parents who harass, threaten, or attack teachers and staff accountable remains unclear.

Some school districts are providing teachers with information sheets and support to talk to students and parents about CRT and what is being taught in schools. And teachers are taking action themselves; the Zinn Education Project’s “Pledge to Teach the Truth” has amassed over 6,000 signatures from educators across the country who “refuse to lie to young people about U.S. history and current events.”

But many teachers are finding only barriers. Some districts are actively supporting CRT legislation out of fear of repercussions.

“Some teachers who have signed [a pledge to teach the truth] have been called into principal offices and told they should remove their name,” Hagopian explained. “One was asked to sign basically a loyalty oath saying they wouldn’t teach racism.”

Where local governments flail and schools fail to respond, educators are finding power by acting in solidarity with partners and allies. Teachers, students, and their broader communities are calling for coordinated actions and protests to stop legislation and hate.

“They want to stop [students] from being able to change [institutional racism] and uproot those systems of oppression,” Hagopian said. “But, we have said we refuse to lie to students … It will be courageous educators today who will stop these racist laws state after state.”

Teachers are calling for parents and others in their communities to express their support for education that includes racial literacy so schools and school boards don’t buckle to conservative pressure.

“Don’t think that because you believe in it, you don’t need to speak out,” Joshi said. “Right now we need to hear those voices. You need to show up, because anti-CRT people will show up.”

Teachers unions are vowing to show up to support educators. Both the National Education Association and the American Federation of Teachers (AFT) have issued statements promising to protect educators facing possible repercussions in anti-CRT districts and states. AFT added millions of dollars to their legal defense fund in a show of readiness for future attacks on teachers. However, their processes appear to be blanket, without any specific or additional support for teachers of color.

This may end up being a battle of the courts, as conservative activists also lodge lawsuit after lawsuit against CRT. In an era where anti-CRT bills are overlapping with anti-trans bills and bills restrict voting rights, all amidst the backdrop of a pandemic that’s killing tens of thousands from communities of color, Black, Indigenous, and other teachers of color are facing a steep climb in caring for their students’ education and well-being while also protecting their own mental health and safety. For Hagopian, there is strength to be found in the examples of history, and how education encourages students, parents, educators, and other advocates to work together.

“The purpose of education is not simply to eliminate wrong answer choices, but instead to identify problems in our society and find collective solutions for them,” Hagopian said. “That’s where education can go and that’s what students, parents, and educators will link up and fight for.”

Umme Hoque is a writer, editor, and organizer. She’s passionate about writing about and investigating issues for low-income workers and communities of color, lifting up the experiences of those who are most impacted.