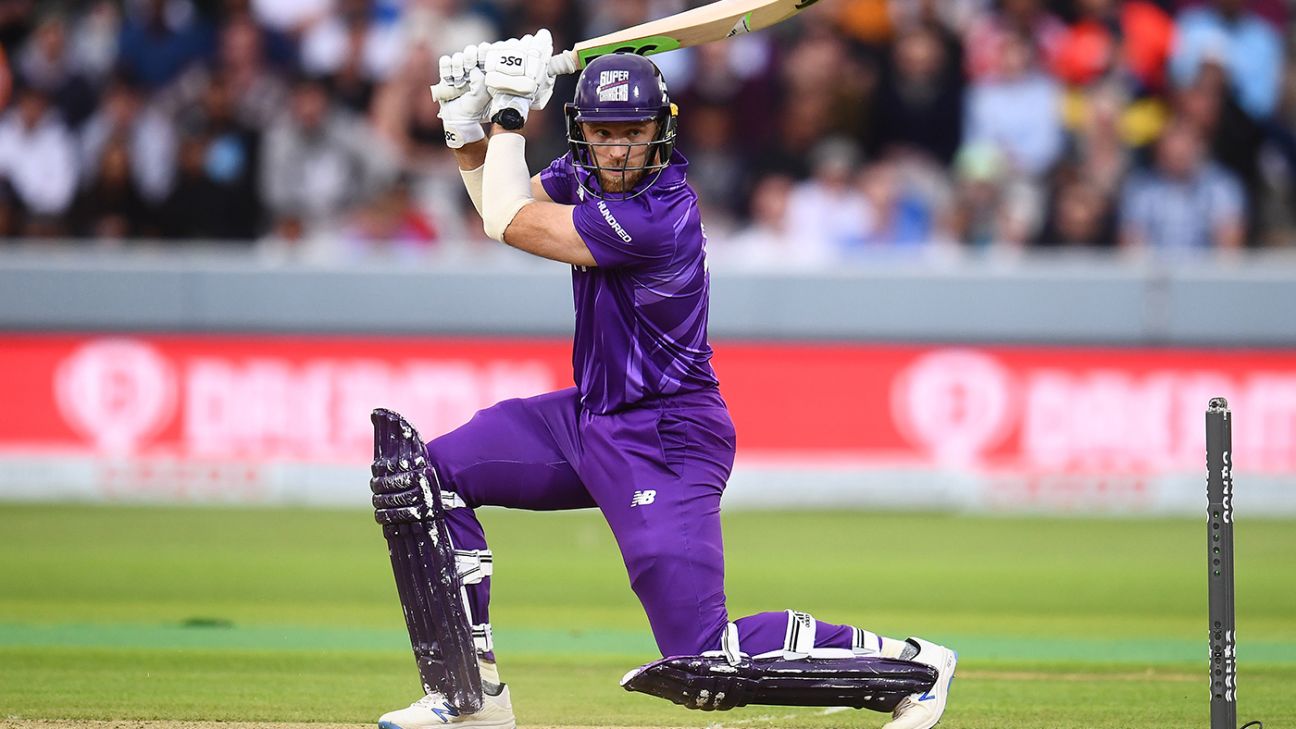 David Willey hit the highest individual score of the men’s Hundred then took two wickets in the first ten balls of the run chase as the Northern Superchargers kept their knockout hopes alive by thrashing the winless London Spirit.

Willey, standing in as Superchargers’ captain with Faf du Plessis still suffering symptoms of concussion and Ben Stokes taking an indefinite mental-health break from the game, hit six sixes in his 81 not out off 45 balls – his highest score in any format for three years – to lift his side to 155 on a used, two-paced pitch, cashing in against some wayward death bowling.

He then gave himself a ten-ball spell with the new ball, setting the tone for an abject Spirit chase by having openers Adam Rossington and Josh Inglis caught at mid-on and cover, respectively. Eoin Morgan top-scored for the Spirit with 27, but Mujeeb Ur Rahman sucked any remaining life out of their innings with a miserly spell of 2 for 6 in 20 balls, as Spirit fell some 63 runs short in the Hundred’s most comprehensive drubbing to date.

When there’s a Willey, there’s a way
Willey had managed six runs from his three innings in the Hundred to date, coming in at No. 5, No. 8 and No. 3, and struggling to make any impact. At Lord’s, he came in at No. 4 to create a left-right partnership with the in-form Harry Brook, in the hope that one of them would be able to target the short boundary at all times.

It has often been suggested that Willey’s primary weakness as a limited-overs batter is against short balls into his body but he has worked hard to improve his game, and the Spirit’s plans to him were far too predictable. He had a stroke of luck early on when he top-edged a pull over keeper Rossington’s head, but cashed in against Blake Cullen, hoicking a bouncer over the short boundary to get up and running.

A flashpoint came with Willey on 34, when he miscued a pull off a full-toss from Roelof van der Merwe to deep midwicket, only for it rightly to be given as a no-ball on height. He cashed in at the death, smiting Cullen for six over the scorebox and on to St John’s Wood Road, mis-hitting him over long-off and then slugging consecutives Mohammad Amir full tosses over the short boundary and into the Mound Stand. All told, Willey hit Cullen and Amir for 55 runs off 24 balls; his strike rate across his innings was exactly 180, on a night when no other batter scored at 140.

Men against boys
Fresh from his boundary blitz at the death, Willey embraced the finest traditions of captaincy by giving himself the new ball and keeping himself on for a second set. He found enough swing to prevent Rossington from freeing his arms and hitting him over the short leg-side boundary – as he had to Southern Brave’s attack in the Powerplay on Sunday – and had him and Inglis caught in the ring as they desperately tried to clear the infield.

Things hardly got better for Spirit after they subsided to 5 for 2 from 10, and it had briefly looked as though Willey would single-handedly kill the game inside the Powerplay. He returned to bowl balls 16-20 and must have considered making himself the first man to bowl 20 of the first 25 by staying on at the far end. Instead, he didn’t even bring himself back to complete his allocation, resembling a club captain making sure everyone got value for their match fee by sharing the bowling around.

Magnificent Mujeeb
Spirit had briefly threatened a revival when they hit 12 and 13 runs from consecutive sets of five balls, with Morgan and Luis Reece trading blows. But when Mujeeb was brought into the attack after 35 balls, he made sure that their hopes were fleeting.

Bowling his usual assortment of mystery spin and turning the ball both ways at decent pace – he zipped a couple through at 65mph – Mujeeb conceded two runs from his first set of five, and two from a spell of ten balls which accounted for Nabi and saw Joe Denly play out six consecutive dot balls, before returning at the death to remove the swiping Amir. His figures of 2 for 6 made his the most economical spell in the men’s tournament to date.

Matt Roller is an assistant editor at ESPNcricinfo. @mroller98