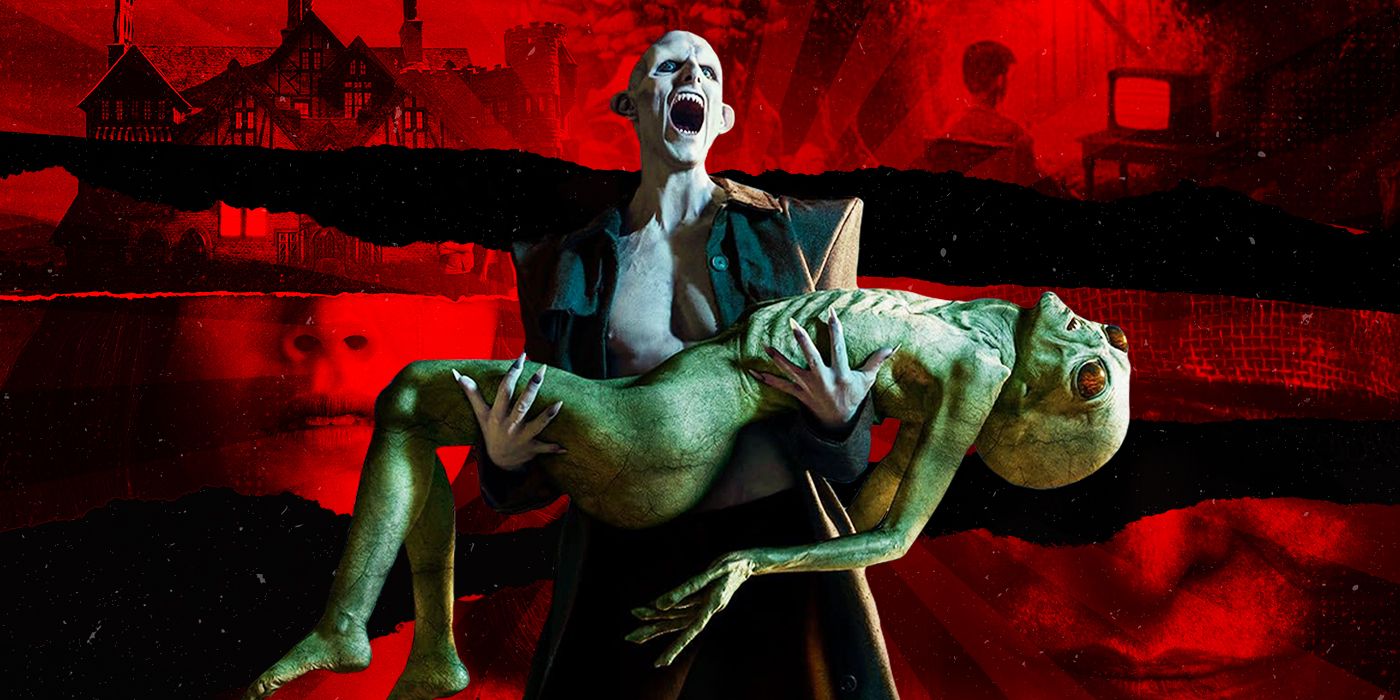 The tenth season of the American Horror Story is finally here! One of the most beloved supernatural horror shows on TV, admired by horror fanatics and critics, the show is back with a fresh new storyline that has been split into two. This season has been named Double Feature. In a change from American Horror Story’s regular format, Double Feature will be divided into two halves: Red Tide and Death Valley.

After a wait of nearly two years, American Horror Story finally returned on Wednesday, August 25, 2021, with a two-part premiere. The news gets only better for the fans of the horror anthology, as FX has already renewed the show for three more seasons. More screams, chills, and thrills are on the way!

While you wait excitedly for the next episode, we have gathered a list of 7 shows that’ll help you tackle your horror hunger pangs. These shows are equally as terrifying as your favorite horror anthology, while also providing a refreshingly new take on spooky stories.

The Haunting of Hill House

Let’s start off the list with one of the most well-written ghost stories of the past decade, and another standout horror anthology series. Directed by Mike Flanagan, the story of The Haunting of Hill House is loosely based on the 1959 novel of the same name written by Shirley Jackson. Five siblings tell the tale of the paranormal experiences they faced at Hill House that forced their family to flee from the mansion in 1992. The story walks back and forth between two timelines, one features the present-day narratives and the other depicts flashbacks from past events. It featured an amazing cast consisting of Carla Gugino, Henry Thomas, Michiel Huisman, Elizabeth Reaser, Oliver Jackson-Cohen, Kate Siegel, and Victoria Pedretti. The show was critically acclaimed, as was the follow-up season The Haunting of Bly Manor. The detailed and upsetting visuals, incredible performances, and well-composed scares intertwined with a tragic family tale make it a must-watch for horror lovers.

Of the numerous supernatural, fictional, and spooky shows/movies that have been adapted from horror icon Stephen King‘s works, very few come close to the terrors of Castle Rock. The town has served as the setting for various fictional horror novels and stories written by King, including favorites like Whose and The Dead Zone. A psychological anthology horror series, it was cancelled after two seasons by Hulu much to the disappointment of fans and King himself. Set in the title town, Castle Rock was an amalgamation of Stephen King’s best-loved works, providing a closer look at the mythology and characters from his books. If you’re looking for a nerve-racking and nostalgic trip to King’s fantastical universe, this series is your go-to.

The Haunting of Bly Manor

The Haunting of Bly Manor is a follow-up to The Haunting of Hill House directed by Mike Flanagan. It is based on the various works of Henry James, most notably his 1898 novella The Turn of the Screw. The series comes with a new plot and new characters, though some of the cast members from the previous series were retained, something reminiscent of the American Horror Story, but the narratives of the two series are not connected. The Haunting of Bly Manor is a Gothic romance ghost story, that tells the tale of an au pair hired by a man to look after his niece and nephew at Bly Manor, where they begin to experience several supernatural phenomena. Though not as scary as its predecessor (and the pandemic), it was one of the scariest TV shows of 2020 and deserves a spot on your horror watchlist.

Created by Chris Carter, The X-Files is a sci-fi horror drama that makes you question your own beliefs. The show was a standard-bearer of spooky TV in its era and had a successful run, spanning nine highly popular seasons and a tenth short commemorative season in 2016. The series focuses on Federal Bureau of Investigation (FBI) special agents Fox Mulder (David Duchovny), and Dana Scully (Gillian Anderson) who investigate X-Files: overlooked and unsolved cases involving paranormal phenomena. Mulder believes in the existence of aliens and the paranormal while Scully, a medical doctor, scientifically analyzes Mulder’s theories. The X-Files tapped into popular conspiracy theories about the government dealing with extraterrestrial life forms secretly while pushing their own agenda. An all-time great example of the “monster of the week” storytelling approach, the series features its fair share of spooky creatures, and will definitely tingle your paranormal investigative senses.

If you are a fan of creepypastas, and you haven’t watched Channel Zero, you’re definitely missing out on one of the best TV adaptations yet. A horror anthology series created by Nick Antosca, the show brings various urban legends to life, and ran for four seasons on Syfy. Each of the seasons tells the tale of a different creepypasta that became popular on the internet over the years, expanding the internet-age scary short stories into robust, terrifying horror tales. The first season is based on Kris Straub‘s Candle Cove while the second is based on Brian Russell‘s The No-End House. The third and fourth stories are inspired by Kerry Hammond’s Search and Rescue Woods and Charlotte Bywater’s Hidden Door, respectively. The series features some of the most intriguing and eerie monster designs, and you can definitely expect some jumps and scares while watching the show.

A French horror show that was critically acclaimed internationally, Marianne was created and directed by Samuel Bodin. The single-season hit stars Victory of the wood as Emma, a famous horror author who writes about a horrifying figure named Marianne, who has tormented her in the past in her childhood dreams. She returns to her hometown when she begins to have her nightmares again, but as expected, things take a turn for the worse and Marianne transcends to reality. With a perfect blend of a high-stakes character story and truly terrifying haunting sequences, Marianne is a rollercoaster ride horror lovers wouldn’t dare to miss!

Created by Joel Anderson Thompson and Mario van peebles, Superstition is a perfect mix of Supernatural and straight-up horror (quite literally, making a direct reference to Sam and Dean). Though Supernatural lost much of its horror element after the fifth season, Superstition only had a single season, after which it was cancelled, and it stayed true to the genre for each episode. The series revolves around the Hastings family who are hunters (much like hunters from Supernatural) protecting the town of La Rochelle, Georgia. It received average to positive ratings, but was ultimately scrapped by Syfy in 2018. The show is definitely worth a watch for both Supernatural and horror fans.

Looking for something classic and spooky? We’ve got just the show for you. Eerie, Indiana is a sci-fi horror show created by Jose Rivera and Karl Schaefer. It aired for a single season consisting of 19 episodes, from September, 1991 to April 1992. The story focuses on Marshall Teller (Omri Katz), a teenager whose family had moved to the sparsely populated town of Eerie. They are faced with numerous urban legends and other-worldly phenomena, such as Bigfoot and a still-living Elvis Presley. The show incorporated timely placed jokes with a tone of seriousness, and also breaking the fourth wall at times, which makes it extremely wild and interesting to watch. Eerie, Indiana is a perfect fusion of humor, horror, mystery, sci-fi, and suspense, and should definitely be on your watchlist.

‘The Wheel of Time’ Amazon Series: Release Date, Cast, Filming Details & Everything We Know So Far

The Wheel turns and a legend begins. Robert Jordan’s spectacular fantasy world is coming to Amazon.