2022 World Cup Qualifiers: I pick Harambee Stars squad and no one can influence me to do otherwise – Mulee 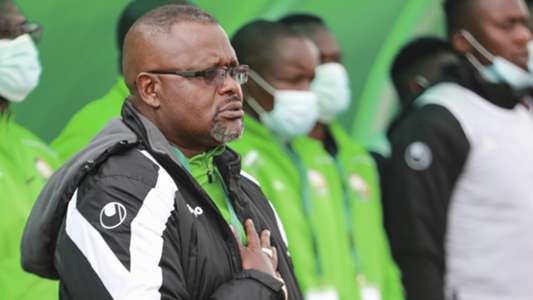 Harambee Stars coach Jacob ‘Ghost’ Mulee has come out to vehemently deny someone in Football Kenya Federation is influencing his squad selection taking part in the 2022 World Cup qualifying matches.

The 53-year-old tactician was in the spotlight before Kenya played rivals Uganda in their opening fixture of the qualifiers at Nyayo Stadium on Thursday. Reports emerged he had delayed naming his starting eleven because “a top official in the federation” had ordered him to pick players he was not ready to use.

The reports indicated the person behind the orders was looking to have his specific players named in the squad to earn caps so they can easily be sold to clubs in Europe.

Mulee has now come out to dismiss the same by indicating he was the one in charge of naming the squad and when the team loses or suffers defeat, it is all down to him.

What did Mulee say?

“I have the mantle of the national team and I want to win, nobody can influence my first XI, it has never happened anywhere in the world so if someone has that information, he should come and give it to me because…[he laughs], I pick the team, I make the decisions, win or lose it is all on ‘Ghost’ Mulee’,” the tactician told Goal.

In the game against Uganda, Kenya secured a 0-0 draw at home but with Mali beating Rwanda 1-0, they moved top of Group E.

Mulee is now preparing Kenya to face Rwanda in their next match of the qualifiers at Nyamirambo Stadium on Sunday and in a previous interview, Mulee said he was satisfied with Kenya’s opening result and was looking forward to picking maximum points against Rwanda.

“We did not expect the result, but it is encouraging considering the fact we had not played any build-up match since playing Togo [in the 2021 Africa Cup of Nations qualifiers]. This was our first game and as usual, it is tough to get your rhythm,” Mulee told Goal.

“If you were keen enough, the selected team was a mixture of experienced players and those upcoming ones who want to be involved more often in future assignments.”

Mulee continued: “I cannot say it is a bad outing, the journey has just started, and for us, we started with a point which is a plus. We now have to focus on our next assignment against Rwanda where we will be targeting all the three points.”

In the last four matches between Rwanda and Kenya, the latter stand a better record as they have managed three wins with the other game ending in a draw.