2022 World Cup Qualifiers: ‘Harambee Stars cannot give up’ – Muguna ahead of Rwanda date 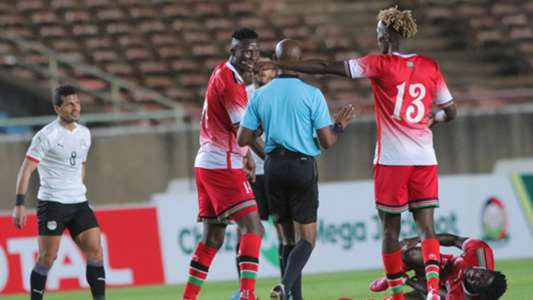 Kenya midfielder Kenneth Muguna insists the team cannot give up and a win against Rwanda on Sunday will be key to their ambition of going to the top of Group E in the 2022 World Cup qualifiers.

The Harambee Stars started their campaign to Qatar on Thursday with a goalless draw against neighbours Uganda and are trailing leaders Mali, who defeated Amavubi 1-0, by two points.

The newly signed Azam FC player is now focused on the remaining five matches in the group, starting with Sunday’s away game.

‘Rwanda is a must win’

“Rwanda is a must-win match for us because we want to be on top of the group as soon as possible,” Muguna told Goal.

“We know we have to work hard for it and it will come with a lot of pressure but we will absorb it for our country. We are going to fight for the win because we know Rwanda will be looking for a win as well.

“Against Uganda, the 0-0 result was not what we were looking for, but it is what we got and have to build on that. We understand we needed a win especially at home, but we cannot give up since we did not get it because this is football.

“And we have about five matches to go so we have to remain focused and have confidence in what we are doing in training. We know what we want to execute as a team; and the remaining matches, starting with Rwanda, at least we get a win.”

‘It was a special moment’

Meanwhile, fellow midfielder Richard Odada concedes it was a special moment for him to get a chance to play against the Cranes.

Despite the stalemate, it was the 20-year-old Red Star Belgrade man who stole the show in his defensive midfield role and even received coach Jacob ‘Ghost’ Mulee’s praise.

“It was a special moment for me because I was waiting for [the debut] and I was happy to play for the national team, it was amazing,” Odada told Goal.

“Unlucky we did not get the result; we had expected to get good results. We did not win the game; that is the most important thing, winning. Anyone can draw.

“We have a lot of players and the coach can field any player that he thinks is ready for the game. In the national team, nobody is guaranteed a position, anyone can play.

“We will give our best and try to get the results.

“That is the most important thing, we will try to give our best and get the results.”