15 Most Culturally Influential Movies Of The 1960s 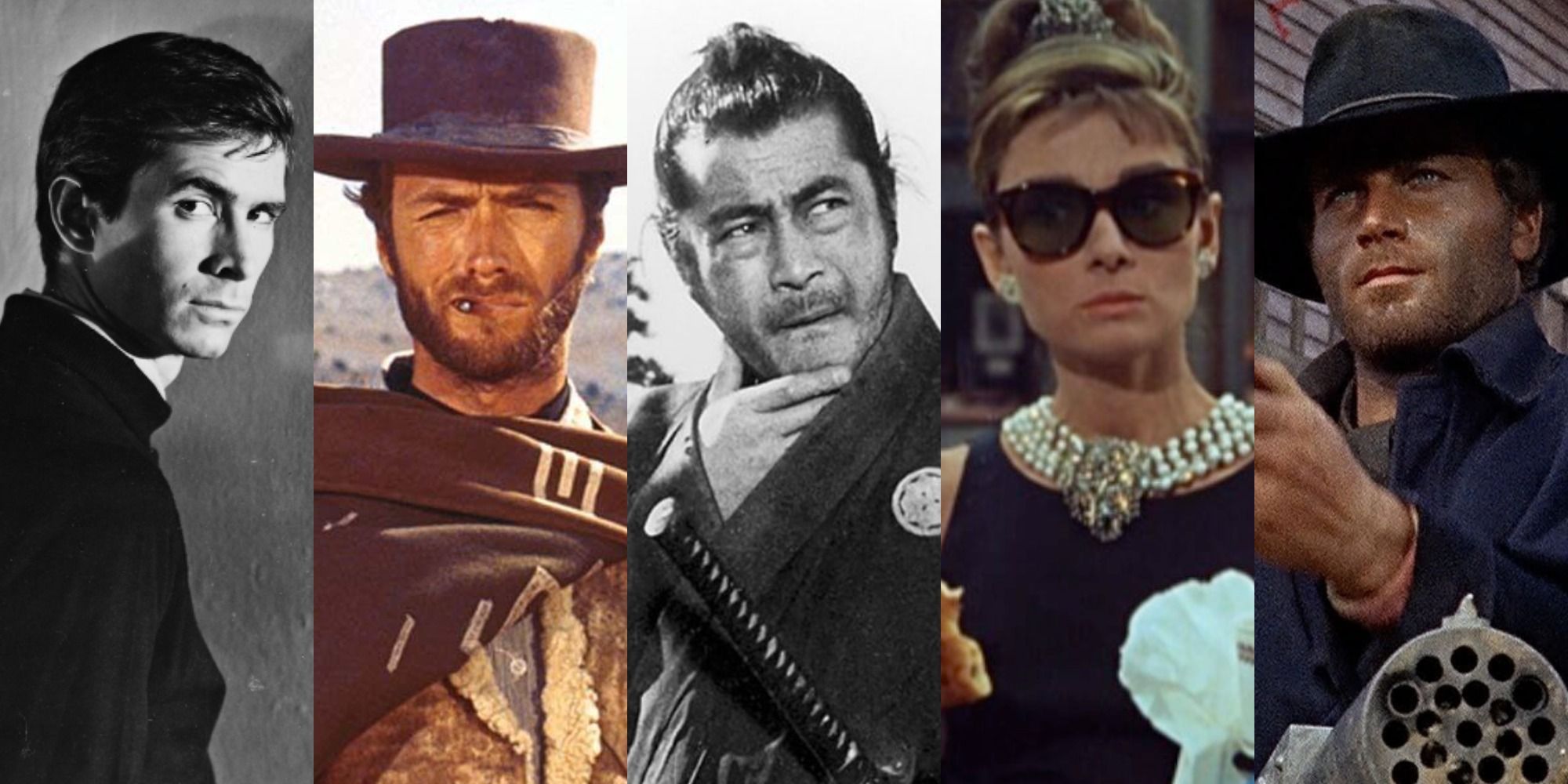 Even though there are original movies coming out all the time, a lot of contemporary hits have been heavily inspired by films that were released decades ago, if not being direct continuations of them like in the case of the unkillable James Bond franchise.

Related: The 10 Most Influential TV Series of All-Time

Movies are a form of media that have a huge impact on pop culture in general, however, and the 1960s was a decade that saw a huge turn in the way people lived their lives and what was considered acceptable in terms of media. This decade was a turning point in a lot of ways, and the most popular ’60s movies often reflected that.

Updated on October 10th, 2021 by Mark Birrell: The most popular movies of the 1960s, though not necessarily mentioned in mainstream discourse as much as they used to be, still form the foundation of pop culture as most people know it today. From Westerns and spy movies to horror and science-fiction, the ’60s reinvented many of the most famous staples of popular filmmaking and each of the decade’s most influential films from around the world must be recognized if all of the references and inspirations in today’s world are to be properly understood.

● Available on Tubi and Vudu

After the heyday that Westerns enjoyed from the ’30s through the ’50s, the genre began to undergo subversive changes throughout the 1960s and the most well-remembered of these variations was the rise in popularity of the so-called “Spaghetti Western”, largely Italian productions set in the American West or Mexico but often shot mostly in Spain.

Of this somewhat niche but still hugely influential subgenre, two directors are remembered as the most famous, the first being Sergio Leone and the second being Sergio Corbucci. Corbucci’s most enduring creation was his own mysterious gunslinger, Django, whose name survives today in popular culture thanks in large part to Quentin Tarantino’s film Django Unchained, which features a cameo from original Django actor Franco Nero. The style of the original revenge movie can, however, also be clearly seen in various pulp stories in film, TV, and anime.

For a very long time, just about every movie released after 1962 that had a desert in it in some way referenced David Lean’s historical epic Lawrence of Arabia. The sweeping shots of the breathtaking landscapes and the stirring music of Maurice Jarre have become an inextricable part of who popular culture views desert landscapes, not to mention the film’s impact on what audiences would expect from the overall scope of a cinematic journey.

The film won 7 Oscars, including Best Director and Best Picture, and, even though he lost to Gregory Peck for his performance in To Kill a Mockingbird, Peter O’Toole’s turn as the eponymous T.E. Lawrence is often imitated even in the modern-day.

Though its final shot may still be the most famous thing about it, and still parodied to this day as one of the most well-known examples of a twist ending, Planet of the Apes as an overall movie has proven to be very influential within the sci-fi genre.

Though quaint by modern standards, the ape makeup in the film was a big leap forward for genre filmmaking and its direct approach to social metaphors proved to be as popular with audiences in the 2010s when the series rebooted as it was in the ’60s.

RELATED: 10 Chilling Behind The Scenes Facts About Rosemary’s Baby

The movie’s then-groundbreaking exploration and heightening of emotions surrounding pregnancy and motherhood into impactful horror is something that is still highly regarded by critics in films like Hereditary, The Babadook, and We Need to Talk About Kevin.

Akira Kurosawa’s samurai masterpiece Yojimbo was hugely influential in global filmmaking not just after the 1960s but during them also. It was unofficially remade by Spaghetti Western director Sergio Leone, borrowing so much from the story that a lawsuit was filed by Japanese distributors, Toho.

Toshiro Mifune’s wandering warrior being the basis for Clint Eastwood’s stony screen persona is enough proof of the film’s ability to inspire but the intelligent plotting of the story became as important a stepping stone in the development of action movies as Kurosawa’s grander epic, Seven Samurai.

Zombies have been a subject of myths and legends in different cultures for a long time, but they didn’t see much attention in the cinematic world until George A. Romero released this cult classic, Night of the Living Dead.

This movie follows a group of people who find themselves trapped in a Pennsylvania farmhouse when a group of terrifying “living dead” creatures rise from the grave and descend upon them. On top of inspiring movies and TV shows for decades to come, this movie was groundbreaking at the time of its release due to the casting of Black actor Duane Jones in the lead role.

James Bond has become an iconic character in the world of movies. When many people think about spy films, they immediately think of 007 himself, who remains a massive box office draw to this day.

His first movie, Dr. No, was released in 1962 and stars Sean Connery as the superspy, a British agent who was originally created in the stories of author Ian Fleming. From the quirky villain and his lair to the beautiful locations and costumes, the film has influenced every spy movie that followed it in some shape or form.

It’s hard to think about movies from this part of the 20th century without immediately thinking about Alfred Hitchcock. Films like Rebecca, Rear Window, and Vertigo are classics from the 1940s and 1950s. But when it comes to the 1960s, Psycho is among the most famous horror movies ever made.

It was released in 1960 and follows a secretary named Marion who finds herself at a hotel run by a man named Norman Bates. It’s then the movie shifts gears and becomes an intense study of the deeply disturbed Bates and the murderous secrets surrounding him. The stabbing motion of the killer in the iconic shower scene and the accompanying soundtrack of shrieking strings instantly became symbolic of horror movies in general, not least the slasher subgenre that would emerge in its wake over the course of the next two decades.

In the Heat of the Night is a movie that was released in 1967 and is based on a novel of the same name by John Ball. This film is set in a fictional southern town and follows a Black police detective who is tasked with investigating a heinous crime.

The movie’s frank handling of racism has aged well and was met with huge praise, helping it win 5 Oscars, including Best Picture, generating two sequels and a TV series of the same name.

Dr. Strangelove Or: How I Learned to Stop Worrying and Love the Bomb (1964)

Released in 1964, Dr. Strangelove or: How I Learned to Stop Worrying and Love the Bomb is a political satire and black comedy film that was directed by Stanley Kubrick. This movie is a satirical take on the Cold War and follows a US Air Force General who orders a strike on the Soviet Union.

From Peter Sellers’ eccentric title character to the famous shot of Slim Pickens riding the atom bomb, it has remained one of the most frequently referenced movies to come out of the entire decade.

● Available on The Criterion Channel

The Apartment was released in 1960, the same year in which Fred and Wilma Flintstone became one of the first onscreen couples to sleep in the same bed together on primetime TV. Because of the fact that this was a time period in which the depiction of intimate relationships like that was still pretty taboo in media, The Apartment is a movie that really broke some boundaries.

This movie follows an insurance clerk who allows his co-workers to use his New York City apartment to host their extramarital affairs in the hopes of getting ahead in his own career. Though the story may have been somewhat risque, audiences responded well, with the film winning 5 Oscars, including Best Director and Best Picture.

2001: A Space Odyssey is a science-fiction movie directed by Stanley Kubrick that redefined the genre in terms of movies, expanding both the visual and philosophical scopes of high-concept Hollywood movies forevermore.

The plot deals with themes of human evolution throughout time and into the future. 2001 had some pretty incredible and ambitious special effects for the time period that, paired with the unique narrative structure, made it immeasurably influential.

Breakfast at Tiffany’s was released in 1961 and stars Aubrey Hepburn as Holly Golightly, a naive and eccentric New York City socialite. The movie is based on a Truman Capote novella by the same name and won multiple awards, including multiple Oscars and Grammys for its score and the infamous song “Moon River”.

The movie became an instant classic though it has aged very poorly in many respects, particularly in regards to the racial insensitivity of actor Mickey Rooney’s portrayal of the Japanese character I. Y. Yunioshi.

The Good, the Bad, and the Ugly is a Spaghetti Western that was released in Europe in 1966 and stars Clint Eastwood, Eli Wallach, and Lee Van Cleef. Though a standalone story, it is now generally considered to be the third and final installment in director Sergio Leone’s “Dollars” trilogy, sometimes called the “Man with No Name” trilogy, in reference to Clint Eastwood’s nameless main characters in each film, being preceded by A Fistful of Dollars and For a Few Dollars More.

The movie follows three gunslingers who are all competing to try to find a buried cache of gold during the American Civil War. It’s not only an essential example of the Spaghetti Western genre but, following the legal issues surrounding A Fistful of Dollars and Yojimbo, all three movies in the “Dollars” trilogy were released in the same year in the US, so it’s often considered to be the film that secured Clint Eastwood’s status as a successful leading man.

Easy Rider was released in 1969, closing out the 1960s. It was an incredibly influential film that went on to inspire a new movement known as New Hollywood. Stars Peter Fond and Deniss Hopper both wrote the movie, with Fonda producing and Hopper directing.

The plot of their two bikers traveling across the US in order to do a shady deal really touched on a huge part of the major changes of the decade, as the most pervasive aspects of the various countercultural movements of the ’60s began to take root in mainstream society. The image of the pair riding on the open road to “Born to be Wild” by Steppenwolf became instantly iconic and its legacy as one of the greatest biker movies of all time endures.

Next: Movies From The 1950s That Every Film Buff Needs To See