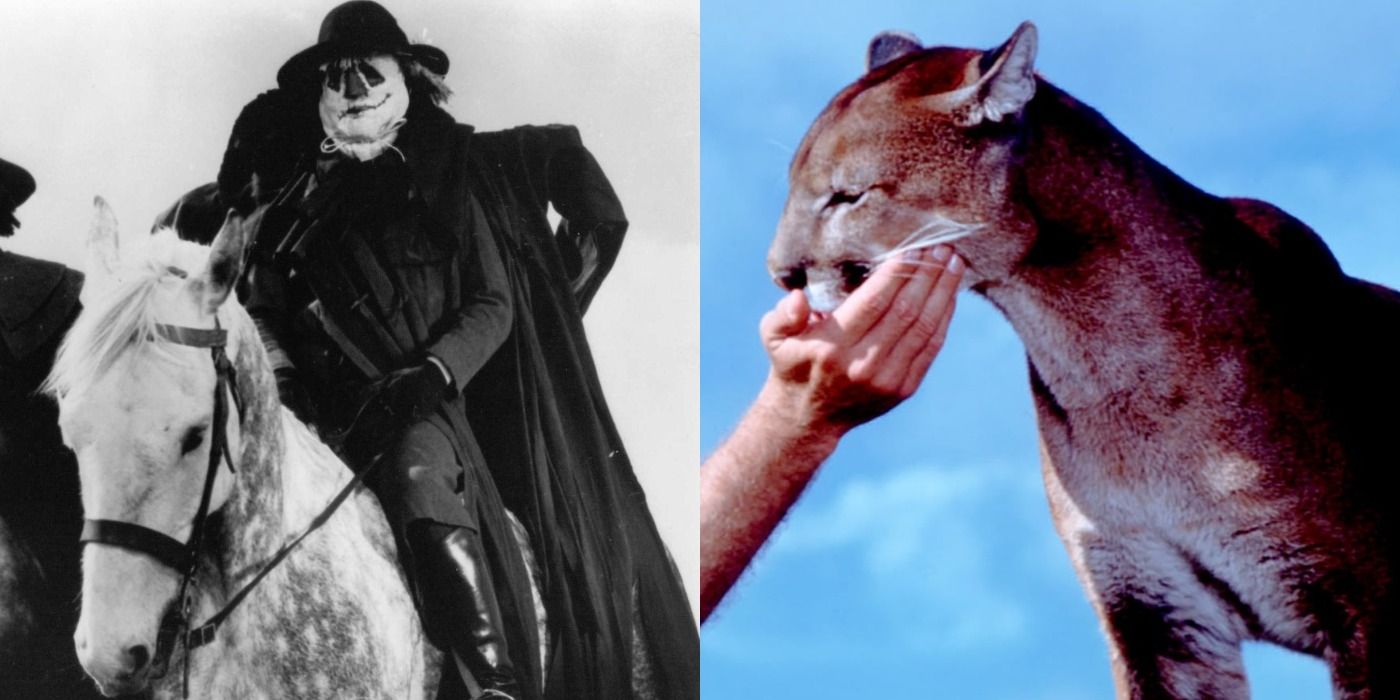 To say that everyone has their favorite Disney movie wouldn’t be too large of an exaggeration. From princesses to pirates and more, the studio has released a bumper crop of timeless classics and animated favorites. But while many of their treasured films are readily available on DVD, Blu-ray, and home-video, there are still those white whales out there that have yet to see a proper rerelease.

RELATED: 10 Disney Movies From Before The ’80s You Didn’t Know They Made

Since original VHS tapes and a few DVDs are incredibly rare, many of these Disney movies have been unfortunately forgotten by the fanbase. Whether they are hardcore collectors or diehard fans looking to experience everything the studio has to offer, there are still treasures to be found.

Updated on October 3rd, 2021 by Zach Gass: With the invention of Disney+, the house of mouse has essentially eradicated the fabled “Disney Vault.” Now, Disney fans essentially have their pick of magical movies to enjoy at the click of a button. That all being said, the streaming service’s vast library does not contain all of the studio’s work, and some features still remain rare in the eyes of dedicated fans. They might be absent, they might be locked away in some Disney archive, they might even be lost to the sands of time, but for some reason, these movies are rare commodities still only found in the further recesses of home video.

Not the rarest, but one that will go for around $50 on Amazon for Blu Ray, In Search of the Castaways is a rare adventure film with notes of Swiss Family Robinson and a touch of Treasure Island for good measure. One of the many films featuring Haley Mills, it was definitely more exciting than something like The Parent Trap.

When an eccentric professor discovers a message in a bottle supposedly from the lost Captain Grant, he launches a grand expedition to rescue him and his crew. Accompanied by Grant’s children and ship magnate’s son, the party encounters wild animals, cannibals, and a notorious gunrunner, the adventure stretches from the mountains of South America to the seas of the New Zealand Coast.

It might come as a surprise to some, but not only did Disney’s Old Yeller have a son, but his son got a sequel movie too. Savage Sam picks up after the events of Old Yeller, but with his son Sam now the canine companion to Arliss and Travis from the original film. When their parents leave them to visit their grandmother, the boys are left to their adventures in this Disney western.

Though it has only a handful of references to the first movie. Savage Sam is a stereotypical western through and through. It has a family set in the outlands of Texas, cowboys, and encounters with Apache renegades in a familiar backdrop. It’s cliche at times but not without some merit.

It’s honestly quite bizarre how many times viewers forget that this is indeed a Disney movie. Especially given the fact that it featured names like Jerry Rees and John Lasseter attached to the project. The tale involves a band of appliances embarking on a cross-country trip to reunite with their beloved “master,” and a musical adventure ensues.

To say the film isn’t strange would be untrue. It does feature characters like a toaster, blanket, lamp, and radio in the lead roles along with songs about cutting edge appliances and cars in a junkyard, but that’s part of its eccentric charm. It might be an acquired taste for some, but the nostalgia factor is certainly real for this one.

Walt Disney always had a way with animal features, and Charlie, The Lonesome Cougar is an unsung hero of the genre. Billed as “The exciting adventures of a teenage mountain lion,” the film centers around the titular Charlie and his interactions with his human rescuer and their life in a logging community.

One of the last projects to have Walt’s name attached, it definitely has his own personal sentimental flavor. Yes, it’s more than a little cheesy, but watching the animal antics of Goodtime Charlie is more than enough reason to try and track down this film.

There’s a good chance not many modern Disney fans have even heard of this movie, but that’s not because it contains any questionable subject material or a scathing reputation, it just hasn’t been circulated all that much. The film concerns the lives of Jeremiah and his pet lamb Danny in 1900s Indiana.

This was a favorite project of Walt Disney’s, having grown up in the same region and pulling from his own childhood to design the film. As of now, it can’t be viewed on Disney+ but its most recent release was as far back as 2008, making it one of the rarest Disney films on the home market.

Before Jon Favreau took his swing at the animated Disney classic, Stephen Sommers had his interesting reimagining with this 1994 adaptation of the Kipling novel. Taking more from Tarzan than Mowgli, this version has much more adventure and fewer talking animals and musical numbers. That all being said, it’s a thrill ride worth renting.

With a cast featuring Jason Scott Lee, Cary Elwes, and John Cleese, it certainly has some star power behind it. It’s less of a remake and more of a different adaptation from the same source material. It’s different, but certainly exceeds expectations.

“Out of the night, when the full moon is bright, comes the horseman known as Zorro.” Disney is responsible for one of the most beloved adaptations of the masked caballero. The series is loaded with adventure but has just the right amount of humor and drama to keep audiences invested. It’s a swashbuckling series that still hits the mark.

Good luck finding this on home video though, the first series alone goes for nearly $400 on Amazon. The feature film can be found on Disney+, however. Via con Dios, Zorro fans.

As shocking as it sounds, Disney actually made a legitimate horror movie. Not a Halloween special, not a movie that’s just creepy, but a genuinely scary horror film. That film is Watcher in the Woods. Watcher in the Woods is a supernatural thriller that’s perfect for those young horror buffs not ready for an R rating yet.

The story involves the mysterious disappearance of a little girl, psychic phenomena, and an otherworldly entity. It’s really something fans don’t normally see from the wonderful world of Disney.

Something Wicked This Way Comes (1983)

On the subject of horror movies and Disney, Something Wicked This Way Comes is highly recommended. Based on the horror novel by Ray Bradbury, with the author writing the screenplay, the movie isn’t exactly scary, but it is a certain brand of chilling. It’s not nearly as good as the book, but with its charms.

There’s something just purely Halloween with this flick. From the sinister circus that comes to town to the ghostly autumn season that saturates the setting. It’s an underrated film that needs more attention, and if fans can find it on DVD, be sure to hold on to it, lest it should be spirited away.

Before Robin Williams gave fans Flubber, Fred MacMurray gave the world The Absent-Minded Professor. Though it lacks the zany nature of the Robin Williams remake, the original film has some stunning special effects, witty humor, and delightful performances with memorable characters.

Watch as Professor Brainard creates the flying rubber concoction he dubs Flubber in order to save the struggling Medfield college. It’s one of Disney’s earlier live-action outings and should be enjoyed by any Disney history buff or newcomer to the fandom. With laughs, romance, and a cauldron full of green goo, definitely give this film a watch.

If fans are looking for a swashbuckling good time and have already seen the Zorro series, travel across the pond to the southern coast of England to follow the adventures of Dr. Syn and his alter ego, The Scarecrow of Romney Marsh. This swashbuckling tale of midnight riders is perfect for any historical fiction fan. It also has an uncharacteristically creepy theme song.

The series is very difficult to find on DVD, and can often fetch a king’s ransom online. Don’t miss out on this stunning series hosted by Walt Disney himself.

Here’s one that’s surprisingly been swept under the rug in recent years. A Disney classic and a tear-jerker that could rival Bambi or Fox and the Hound, Old Yeller was once one of the studio’s most iconic films. Whatever happened to the “Best Doggone Dog in the West?”

Old Yeller is one of Disney’s most iconic films, partially from its titular star, but mostly due to its infamous ending. It’s a timeless tale that was once a treasure. Despite its reputation, it’s not really been seen in circulation in recent years. Maybe it’s time to call the old dog back home.

Not a film, but a compilation of Mickey’s best moments throughout the mouse’s incredible career. The Spirit of Mickey is a rare gem of a movie and an absolute treat for hardcore Disney fans. What makes it so rare is that it’s VHS only, with no plans for a DVD release.

What makes this compilation different from the rest is the charming commentary given by Mickey and the rest of his pals in between the shorts, remarking about which cartoons were first introduced in color, which won awards, as well as just being their naturally wonderful selves.

NEXT: 10 Mickey Cartoons That Made Him An Icon

Zach Gass is a writer from East Tennessee with a love for all things Disney, Star Wars, and Marvel. When not writing for Screen Rant, Zach is an active member of his community theatre, enjoys a variety of authors including Neil Gaiman, C.S. Lewis, and J.R.R. Tolkein, and is a proud and active retro-gamer.