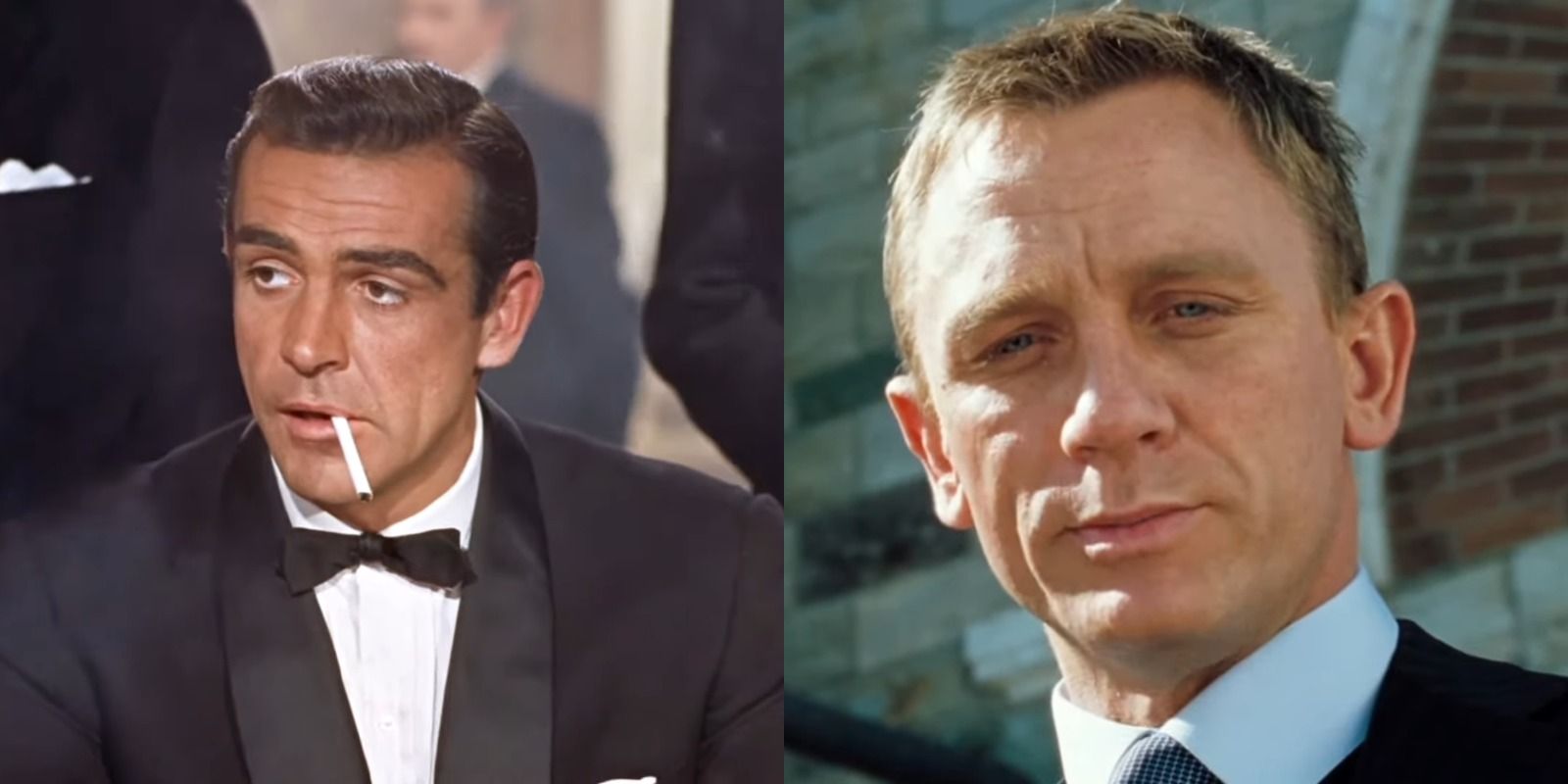 Everyone knows the name and he makes sure of it. “Bond, James Bond” is one of the quintessential movie catchphrases of all time. It may not be in every single James Bond film but it is often enough that fans cheer and applaud every time it is heard. Since its establishment, so many other films, including Batman, have taken inspiration from the catchphrase.

The greatest part about the catchphrase is how malleable it is. It can be used in an action sequence, a pleasant conversation, or during a more romantic moment. With over twenty movies in the James Bond franchise, which ones are used effectively?

Updated on October 14th, 2021 by Melody MacReady: With the release of No Time To Die, the final film of Daniel Craig’s run as the iconic James Bond, there is a new version of the famous line, “Bond, James Bond.” This makes for the perfect time to look back at all of the best times 007 used this iconic catchphrase. With twenty-five movies across the James Bond series, the line has been used so many times that it is impossible to stop at just ten. The many versions of the quite hit differently depending on the actor’s performance, the delivery, the tone of the scene, and even the setting along with the atmosphere.

No Time To Die (Daniel Craig)

In Daniel Craig’s final time in the role, he expects everyone to know who he is, especially at MI6 headquarters. So it’s rather humorous in No Time To Die when he returns to MI6 after five years of retirement and the clerk has no idea who he is by the name Bond.

James states, “Bond.” The clerk stares at him waiting for more and James responds slowly in a very annoyed tone, “James Bond.” Daniel Craig delivers the line with perfect comedic timing and it will go down as the last time Daniel Craig’s bond says the line.

In most cases, Bond introduces himself to make himself known as a result of how cocky he can be at times. However, in Goldfinger, his first introduction has him more intent on doing his job: spying on one of the franchise’s most iconic James Bond villains, Auric Goldfinger.

Though Sean Connery’s delivery of the classic line earlier in the film is classic, there is an even better one in Goldfinger. After Bond sabotage’s Tilly Masterson’s car in order for her to crash, he stops to “lend a hand.” Of course, this is James Bond and he can’t resist turning on that famous charm.

The best part is that Tilly doesn’t have any of it. Even when Bond goes in to deliver the iconic introduction, Tilly stops him from finishing it. In a way, it’s like karma for Bond in the scene as he did endanger the woman’s life.

For Your Eyes Only (Roger Moore)

Every actor to portray James Bond has delivered the iconic line excellently and in different ways. Roger Moore excelled at the charm factor when using it to ‘woo’ over the ladies; even in the sillier films of his tenure, his introductions are always on point.

A perfect example of this would be in For Your Eyes Only. After a surprisingly daring car chase featuring a candy yellow Citroën 2CV, Bond finally introduces himself to Melina. Despite his age: with that smile, suave tone, and bright eyes, that 2CV suddenly feels like an Aston Martin DB5.

This one is the definition of a throwback incarnation of the famous catchphrase. James Bond in a smokey casino, soft music, and likely surrounded by the enemy. An attractive woman, destined to be the newest Bond girl, having a seductive conversation with Bond.

It all culminates in Daniel Craig embracing his inner Sean Connery coolness as he says the line. “Bond, James Bond.” For many, Skyfall is considered one of the penultimate James Bond films and successfully harking back to the very first James Bond film adds to that sentiment.

The James Bond franchise was on thin ice after Sean Connery left for the first time in his long James Bond tenure. Replacing an iconic character was considered to be the decision a fool would make back then. However, On Her Majesty’s Secret Service needed to be made, which meant that George Lazenby needed to stun the audience immediately.

What better way to introduce a new James Bond than with the iconic line? After saving his future wife Teresa “Tracy” Draco from drowning, Bond greets her with a good morning and says that his name is “Bond, James Bond.” It’s a solid introduction that immediately shows Lazenby’s more down to Earth version of the character.

George Lazenby got his introduction in a much more laid-back opening. Timothy Dalton, on the other hand, was given a giant action sequence in The Living Daylights before he is given any dialogue. Bond lands on a woman’s boat and politely swipes her cell phone to report his situation. This is when Bond introduces himself.

Dalton’s delivery is much different than others, especially at the time. It’s an example as to why Timothy Dalton is an underrated Bond, he doesn’t waste time trying to be suave with a quip, similar to Daniel Craig. It was the perfect reflection of what kind of Bond he was; less of the slick suave superstar and more of the gritty, darker agent under fire.

It is impossible to talk about James Bond’s catchphrase without mentioning the first time it was uttered in Dr. No. As Sean Connery lights his cigarette, he says his name is “Bond…” He closes his lighter, “James Bond.” Not only is it one of the first lines of James Bond but it is the first clear look at the character’s face in the franchise.

Without this iconic introduction, the likes of Roger Moore and Timothy Dalton would have never said it. It also set the staple of James Bond introducing himself to a gorgeous woman in a fancy casino.

The best time Roger Moore used this catchphrase was, by far, his first time in Live And Let Die. Entering the main villain’s location, he meets Solitaire and, of course, introduces himself with the iconic line. Everything about how Moore delivers the line here is perfect.

It has just the right tone, the perfect smile, and even a nice little pause and a turn between “Bond” and “James Bond.” It showed that Roger Moore was indeed a stellar actor for the role and the franchise wasn’t going away anytime soon.

Brosnan was already on fire after a killer opening scene and introduction to his suave portrayal of the character in GoldenEye thus reinventing the franchise from becoming outdated. That’s why when Brosnan finally spoke the line to Famke Janssen’s Xenia, fans simply agreed that he was, indeed, “Bond, James Bond.”

Like Skyfall, it definitely harks back to Dr. No as he’s sitting across from the woman who asks his name later. To build up to the introduction, Brosnan also uses another famous catchphrase: “Vodka martini. Shaken, not stirred.”

The World Is Not Enough Ver. 2 (Pierce Brosnan)

Pierce Brosnan’s best performance as James Bond can be found in his third film. By The World Is Not Enough, Brosnan had really perfected his Bond with many iconic moments in his tenure; so even in the cheesiest of scenes, he knew how to balance it with a great enough performance to make it work.

In his second time introducing himself, Bond escapes Renard’s silo using a lift with Christmas Jones. “My name is Bond…” Bond shoots the lift making it rocket to the top as the theme triumphantly roars, “James Bond.” Just as they reach the top. Cheesy? Yes. Effective? Also yes.

Those who don’t care for that much cheese, however, can enjoy Casino Royale ‘s version. For the entire movie, Daniel Craig had never said any iconic lines, minimal one-liners, and wasn’t overly suave, which made the character much more grounded. Even the theme song never appears throughout Casino Royale.

However, the ending comes along to solidify the beginning of the end of James Bond’s origin story. He puts a bullet in Mr. White’s leg after White asks, “Who is this?” Bond walks in, the music builds up as Craig perfectly delivers the line that he earned throughout the film: “The name’s Bond…James Bond.” Roll credits with the iconic theme song and audiences cheered.

NEXT: 10 Actors Who Were Almost Cast As James Bond

Melody MacReady is a writer and transwoman (she/her), passionate about all things pop culture-related. From movies to shows to games to comic books, there is not much that she does not enjoy or appreciate. Melody is also an aspiring film writer and director as well as a voice actor as a hobby. This spark for content creation came from her childhood, growing up with media of all kinds which inspired her to write short stories, write comics, and begin writing about them on the internet. Melody’s biggest inspiration came from first seeing Zack Snyder’s Watchmen in 2009; the film combined with her knowledge of how scenes were done via behind-the-scenes featurettes prior to the film’s release made her fall in love with filmmaking. Not only does she write for ScreenRant, The Gamer, Comic Book Resources, and GameRant but she runs her own personal blog, discussing many things pop culture-related.